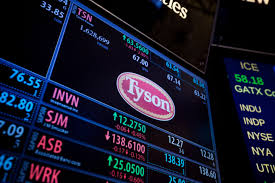 Tyson Shares Tumble 8% on Lowered Earnings Target, but Investors May Not Want to Fly the Coop Just Yet

Tyson Foods shares hit an all-time high of $ 93.29 on Tuesday, but an after-market close downward earnings revision sent shares tumbling 8% to just over $ 86 on Wednesday. A combination of bad luck and operational problems were the cause.

The company has been in expansion mode, announcing a planned investment in Grupo Vibra, a Brazilian poultry producer. That followed acquisitions of various food operations in China, South Korea, Malaysia, Thailand, Australia, and Europe earlier in 2019. It owns such brands as Ball Park, Hillshire Farm, Jimmy Dean, and Aidells

Tyson also said in June that it would begin selling plant-based meat substitutes and plant-meat blended products to take on such firms as Beyond Meat and Impossible Foods.

But there had been signs of some trouble. The company mentioned during the call weakness in its chicken division and pressure on pork sales from market conditions.

Weakness in chicken production showed up as a recall of more than 11.8 million pounds of chicken strips in May 2019 and more than 39,000 pounds of frozen chicken patties on Aug. 15.

A fire, also in August, partially destroyed a beef plant, according to a company press release. Then, on Sept. 3, came the announcement that “short-term challenges” were affecting fourth-quarter earnings. Tyson dropped EPS for the year to a range of $ 5.30 to $ 5.70. Down went the stock.

Rebecca Scheuneman, an equity analyst at Morningstar, wrote in a client note on Wednesday “these headwinds are primarily short term in nature” and that the firm was maintaining a projection of 3.1% organic revenue growth and 8.6% operating margins for 2020.

“I think they have sufficiently addressed the recalls with management changes and adjustments to the line,” Scheuneman wrote in a note to Fortune. “The other issues cannot be attributed to operational problems. While we’re only reducing our fair value estimate by just over 1% (from $ 83 to $ 82), as the profit pressure should be short-term, the shares still look rich to us.”

And if prices bounce back, that may mean investors go in for seconds.