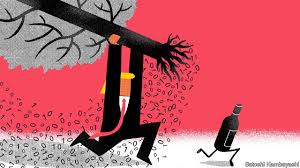 France is giving unilateralism a go

“DON’T TAX you, don’t tax me, tax that fellow behind the tree.” Historically, this rhyme has poked fun at the tax-shy American public. Today it reflects complaints against the French government, which on July 25th introduced a tax on digital services. American companies such as Amazon, Facebook and Google are protesting that they are being treated like the fellow behind the tree. President Donald Trump is itching to hit back. Unilateralism is a language he can understand.

At the heart of the dispute lies a mismatch between where companies make their profits and where those profits are booked for tax purposes. Governments wail that as data and ideas can zip across borders, taxable profits can slip between their tax-collectors’ fingers. The solution requires international co-ordination, to avoid everyone trying to tax the same stuff at once. But negotiations overseen by the OECD, a club of mostly rich countries, are taking too long for the French.

Hence their levy of 3% on the revenues generated from French users of online platforms and digital advertising. The tax is blunt, but that is part of the point. It is meant as an interim measure, to be ditched once an international agreement is reached. It could even make a deal more likely. Affected companies may prefer that to unilateral taxes, and lobby for it.

Not surprisingly, the Trump administration has taken umbrage. It has begun an investigation into the French tax under Section 301 of the Trade Act of 1974 (the same law by which it justifies tariffs on China). On August 19th eight officials heard the companies’ formal complaints. “We cannot absorb this expense,” claimed Amazon’s representative.

No one likes new taxes, of course. But the companies do have a point. International trade rules are supposed to stop governments treating foreign companies differently from their own. And the French seem to have singled out America’s big technology firms. The tax will only hit companies with at least €750m ($ 830m) in global revenue from the relevant digital services and at least €25m derived from French users. Those thresholds conveniently exclude most French companies. Further clues lie in the French nickname for the levy, “the GAFA tax”—a reference to Google, Apple, Facebook and Amazon.

The French appear to have defined the taxed services selectively too. Subscription-based digital services are spared, along with crowdfunding websites and digital payment services. More broadly, Hosuk Lee Makiyama of the European Centre for International Political Economy, a think-tank in Brussels, notes the inconsistency of the French position. France is keen to grab a slice of America’s digitally derived corporate profits, but is loth to agree to new rules that would allow the Chinese tax authorities to share in the spoils from French-owned luxury brands.

The administration seems almost certain to end up finding fault with the French. America could then complain to the World Trade Organisation. But Mr Trump is more likely to fight unilateralism with unilateralism, by raising taxes on French individuals or firms, or by imposing tariffs. The president appears particularly keen to raise duties on French wine.

If this happens, free-traders will surely grumble that Mr Trump has again chosen commercial conflict over co-operation. But the irony is that behind closed doors, his officials had been acting constructively in the multilateral talks at the OECD. Whereas Barack Obama’s administration had resisted further reforms, particularly those that could affect America’s technology companies, Steven Mnuchin, Mr Trump’s treasury secretary, was much more open to them.

It may seem that the French are giving Mr Trump a taste of his own medicine—using unilateral action to put pressure on a negotiating partner. But they may have made tricky discussions more difficult. Admittedly, Mr Mnuchin might not have been able to get Mr Trump’s approval for any OECD reform. But now the dispute is playing out on the presidential Twitter feed. And for once, Mr Trump will be able to deny that he started it. ■