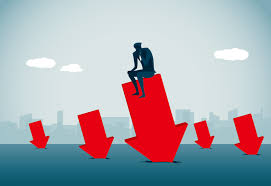 What CEOs, Bankers, and Tech Execs Think About a Coming Recession

When the next recession inevitably strikes, how bad will it be?

That was one of the questions we posed to CEOs, bankers, and tech executives on the sidelines of Fortune’s Brainstorm Finance conference in Montauk, N.Y., in mid-June. The query provoked responses ranging from fears of a cataclysmic collapse to calm dismissal of any economic angst.

As the U.S. economy cautiously cheers on 10 years of growth, the longest period of expansion in American history, people are increasingly asking when the boom-times will come to an end. Recent signs of a potential slowdown—the national output of goods and services grew 2.1% last quarter, down from 3.1% in the first quarter, per the Commerce Department—has also raised investors’ unease.

Several CEOs cited global trade issues as a factor contributing to a possible, eventual meltdown. Hikmet Ersek, CEO of Western Union, said that the protectionist political environment, as manifested in trade conflicts under President Donald Trump, is “bad for business.” He noted that “when goods move jobs are created, and when money moves jobs are created,” and he said that policies encouraging such mobility “will definitely hinder recession.”

Greg Becker, CEO of Silicon Valley Bank, echoed Ersek in pinpointing trade issues and a concomitant slowdown in global growth as root causes of an eventual downturn. He described the next recession as likely to be “a self-inflicted wound.”

“It’ll be a perception-created recession,” Becker said. As more people fear an economic pullback, they will “pause spending” and thus, ironically, create the recession they feared, he said.

The possibility of a recession was clearly on people’s minds at Fortune’s financial summit. “We’re all talking about it,” said Lisa Marchese, head of corporate development at American Express. Despite the glum chatter, Marchese remained optimistic that companies and governments have been thinking through “proactive strategies for how to manage in a downturn, as opposed to reactive” ones.

“I think we’re a smarter world for having been through 2008, 2009,” when the last major economic downturn struck, Marchese said. That crisis, generally regarded as the worst economic slump since the Great Depression, precipitated when a housing bubble fueled by subprime mortgages went bust.

Harit Talwar, head of consumer banking at Goldman Sachs, agreed that Wall Street will be better prepared this time around versus a decade ago when many banks needed bailing out to the tune of hundreds of billions of federal dollars. “I do think that the banking industry has more capital—is more well-positioned—today than, perhaps, it has been earlier,” he said.

Marie Wieck, general manager of IBM’s blockchain program, which sells software that tracks food, money, and other assets on so-called distributed ledgers, emphasized how newly developed technologies could counter a downturn. “We are better equipped with A.I. and blockchain and other mechanisms that can actually help us detect volatility more quickly and actually react to it,” she said. Such new technologies can help “detect and prevent—dampen—some of the impacts” on the market, she said.

But not everyone’s vision of the future was so rosy. Patrick Byrne, CEO of online retailer Overstock.com, sounded an ominous note for the years ahead. “I think it will be bad,” he said. “To be honest, I think that ’08 was the hors d’oeuvres course.”

Bryne, a longtime cryptocurrency enthusiast, compared what he expects will happen to the economy to what might happen to a bridge overloaded with too many vehicles. “It’s a little bit like asking me there’s a bridge that was designed to hold 20 cars passing over it at a time and there’s now 100 going over it,” Byrne said. “When’s it going to break? When’s it going to collapse? That’s really your answer.”

“I’m kind of shocked it’s gone on this long,” Byrne continued. “I think that we have deep, deep, structural, architectonic level problems in our economy that will surface.”