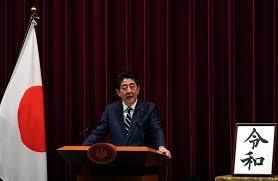 Abe is one of Trump’s closest allies on the world stage and the U.S. president is planning to visit Tokyo in late May. Japan was the first stop on Trump’s November 2017 Asia tour and the two leaders played golf. A similar golf outing could be in the offing for Abe’s visit to Washington.

In Tokyo, Trump plans to greet Crown Prince Naruhito, who will become emperor on May 1, a day after the abdication of his father, Emperor Akihito.

That visit could include a Trump-Abe visit to a sumo championship.

Japan’s foreign and defence ministers will meet with their U.S. counterparts in Washington on Friday, the U.S. State Department said.

Trump has touted his good relationship with Abe, which has seen closer security ties given shared concerns about China’s growing power, but he has also made clear he is unhappy with Japan’s trade surplus with the United States, which was $ 67.6 billion in goods in 2018, according to U.S. figures.

This week, U.S. and Japanese officials held a first round of talks toward a new trade deal Trump has sought and the U.S. side raised concerns over the “very large” trade deficit with Tokyo.

Trump and Abe agreed last September to start trade talks in an arrangement that protects Japanese automakers from further tariffs while negotiations are under way.

Friday’s security talks will cover North Korea and the “continued realignment of U.S. armed forces in Japan,” among other issues, the State Department said.

The discussions are also likely to cover investigations into the crash in the Pacific Ocean close to northern Japan last week of the first U.S.-designed F-35 fighter aircraft assembled in Japan.

The advanced Lockheed Martin jet crashed in good weather about 84 miles (135 km) east of the Misawa air base in Japan’s Aomori prefecture on April 9.

Japan’s first F-35 squadron had just become operational at Misawa, and Tokyo plans to buy 87 of the fighters to modernize its air defenses as neighbouring China and Russia upgrade their military forces.

Discussions on North Korea are likely to cover next steps after Trump’s failed meeting with North Korean leader Kim Jong Un in February.