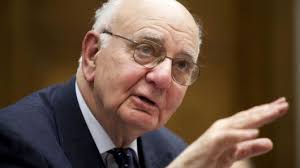 Former Federal Reserve chairman Paul Volcker has some serious fears about the banking industry. And he believes supporting regulators to combat those fears is imperative.

Speaking to analyst Mike Mayo in a CFA Enterprising Investor interview published on Monday, Volcker said that he’s “concerned” about the current “culture of the financial system, banking in particular.” He told Mayo that banks have been dominated by “how much profit the firm (and you) make.” And he believes that the focus on profitability could ultimately affect corporate oversight.

“What’s the role of directors in keeping culture under control?” he asked. “Can the directors of a big bank really do an effective job of overseeing an institution? Or do they see their job as protecting the chief executive officer who they appointed? Or maybe the chief executive officer appointed them, so there is a certain amount of built in mutual interest in ducking emphasis on internal controls.”

Volcker, who served as Fed chairman during the Carter and Reagan administrations, has been one of the more vocal supporters of controlling and regulating banks. He’s the namesake for the Volcker Rule, which aims at limiting banking activity and bank interaction with hedge funds and private equity funds. It also puts the onus on banks to protect customers.

In his interview with Mayo, Volcker talked about the importance of banks protecting their customers. He said that a right and good banking culture is one where “the customer comes first.” The issue, however, is that banks sometimes fail in doing that, Volcker said.

“How many times do they say, ‘Your relationship is everything,’ until they see a way of making a profit?” Volcker asked of banks.

Ultimately, Volcker believes the financial industry needs watchdogs and regulation to protect customers. And despite calls by President Trump and other lawmakers to reduce banking regulation, Volcker called on people to stand with the regulators.