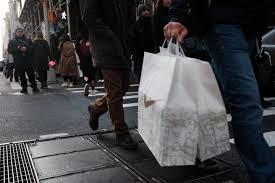 Maybe last year’s holiday wasn’t quite as good as it seemed.

U.S. retail sales in December were down 1.2%, the biggest decline since September of 2009. The tumble shocked economists, who were expecting a 0.2% increase, and raises new fears about the state of the economy.

The numbers were delayed because of the government shutdown and, at present, there’s no way to tell if it was an end-of-year fluke, as there’s no current reporting date scheduled for the January numbers.

Given how strong the economy was in December 2017, when retail sales climbed 2.3%, the 2018 numbers are surprising. And when automobiles, gasoline, building materials, and food services are excluded, “core retail sales” were down 1.7%. The declines were across the board too.

Online and mail order sales were off 3.9%, the biggest drop since November 2008. Restaurants and bars saw 0.7% declines. And hobby, musical instrument, and bookstores were down 4.9%.

One month of weakness, of course, is hardly an definitive economic sign. The 2009 drop came as the economy was climbing out of a recession. But the official numbers fly in the face of holiday spending data from private reports, which indicated overall holiday sales were overwhelmingly strong. And they raise doubts about some forecasts that retail sales growth could hit 4.4% this year.