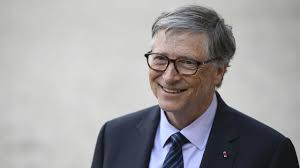 Bill Gates says he’s fine with the idea of higher taxes for the rich, but plans like the one being championed by Alexandria Ocasio-Cortez, which target the top income brackets, are too extreme—and could encourage the wealthy to hide their money in offshore accounts.

Gates, in an interview with The Verge, didn’t mention Ocasio-Cortez or her well-publicized tax proposal directly by name, but his focus was clear. While the Microsoft co-founder and world’s second richest man agreed the U.S. could be “more progressive,” he downplayed “extreme” proposals, such as the freshman representative’s plan to raise the top tax rate from 37% to 70%.

“I believe U.S. tax rates can be more progressive. Now, you finally have some politicians who are so extreme that I’d say, ‘No, that’s even beyond,’” Gates said. “You do start to create tax dodging and disincentives, and an incentive to have the income show up in other countries and things. But we can be more progressive without really threatening income generation—what you have left to decide how to spread around.”

Gates, who has never been shy with his economic opinions, suggested Congress focus instead on Social Security, a capital tax and estate taxes, among other things, to shift more of a burden to the most wealthy.

“In terms of revenue collection, you wouldn’t want to just focus on the ordinary income rate, because people who are wealthy have a rounding error of ordinary income,” he said. “They have income that just is the value of their stock, which if they don’t sell it, it doesn’t show up as income at all, or if it shows up, it shows over in the capital gains side. … We can be more progressive without really threatening income generation.”

Gates was equally critical of modern monetary theory, an economic theory popular with some politicians theorizing that governments don’t need to worry about deficits, since they can always print more money.

“That is some crazy talk,” he said. “It will come and bite you. The people you owe the money to, you will have a problem.”