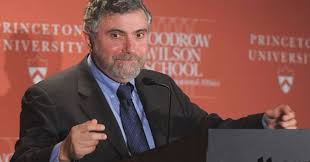 Paul Krugman Believes a Recession Is Coming This Year or Next

The Nobel Prize-winning economist Paul Krugman has added his two cents to the debate over whether a recession is coming. Yes, he says, it is. Probably.

Krugman told the audience at the World Government Summit in Dubai on Sunday that he did not buy the scenario, favored by most economists, that the growth slowdown would not turn into an outright recession.

“I think that there is a quite good chance that we will have a recession late this year (or) next year,” he said, according to a CNBC report.

Krugman cited factors such as the deflating tech “bubble” and President Donald Trump’s “not very effective” tax cut stimulus, though he particularly singled out the Eurozone for already being “really close to recession.”

Italy is already in recession, while Germany is arguably on the brink. The European Commission downgraded its growth forecasts last week.

North American CFOs are expecting a recession by 2020, while economists polled several months ago said the recession would hit by 2021. A month ago, Goldman Sachs said the markets put the odds of a recession in the next year at an even 50-50, though the bank itself claimed the markets were wrong, and the real risk is just 15%.

Who’s right? Who knows? As Krugman noted: “By the way, my track record for this is bad—as is everybody’s. No one is good at calling these turning points.”