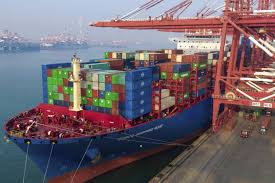 It’s been a bad day for China, with news that its international trade fell even as economists expected it to grow, according to Reuters. Markets are reacting in kind.

Experts had expected year-over-year exports from China to increase by 3%. Instead, they were down by 4.4%. And imports, which were supposed to rise by 5%, bell by 7.6%.

The double blow was a combination of U.S. tariffs slowing product demand in the U.S., as alternative sources of products became financially attractive, and a drop in demand for products elsewhere.

Ironically, there’s more bad news in China’s 2018 trade surplus with the U.S., which was the highest since 2006, as Reuters separately reported. Fears are that could increase animosity from the Trump administration, which has been focused on the disparity.

Economists generally say that such a focus on trade balances with other specific countries isn’t useful because of the benefits of global specialization of labor. An analogy would be for General Motors to be upset that it bought more from bolt and screw manufacturers than it sold to them.

China isn’t the only area affected by softer buying. The EU reported a 1.7% decrease in industrial production between October and November 2018.

The result is that markets are taking a hard tumble everywhere. Asian shares fell, according to Reuters, with Hong Kong’s Hang Seng down 1.4%, the Shanghai Composite off 0.7%, and South Korea’s Kospi seeing a loss of .5%. Japan’s markets were closed for a national holiday.

U.S. futures were also down early Monday morning, according to MarketWatch. The Dow and S&P 500 were each off by 0.9% while the Nasdaq’s drop was 1.1%.