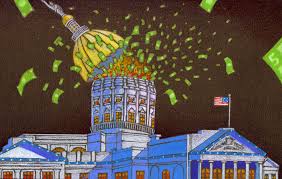 The U.S. is currently experiencing a disastrous “new normal”: The economy is booming at the same time that government debt and deficits are exploding. That scenario is a radical departure from the normally healthy, self-correcting interplay between economic growth and budget shortfalls—and its likely long-term consequences are worth losing sleep over.

In almost every other period in recent history, U.S. deficits have been counter-cyclical. When growth weakens, unemployment rises, so that fewer people are paying taxes. Falling profits shrink revenues from corporate levies, and the government frequently enacts emergency spending measures to recharge the economy. The shrinking tax receipts and temporary outlays swell the deficit. When the economy revives, in contrast, an expanding workforce and a surge in earnings lifts revenues and narrows the budget gap.

What’s remarkable is that the countervailing forces have held debt and deficits in a relatively tight range, keeping our fiscal course well outside the danger zone. The gap between outlays and revenues generally fluctuates, from deficits seldom exceeding 4% of GDP to occasional surpluses, so that over the long-term, annual shortfalls have averaged around 2%. The U.S. economy has been able to handle those modest deficits with ease. So long as GDP growth matched or exceeded 2%, federal debt as a share of national income remained constant, or even declined.

Today, that trend is reversing. Growth and deficits are moving upward in tandem, something that’s happened only briefly in the past. In 2018, GDP expanded at a robust 3.1%, and the Congressional Budget Office forecasts a decent 2.4% reading for 2019. Yet the agency predicts that the deficit will jump by 46% to $ 970 billion in 2020, rising to 4.6% of GDP, and that the shortfall will grow to 7.1% of GDP by 2028 if Congress extends tax reductions that are scheduled to sunset, a likely outcome.

A December 13 report from the non-partisan Committee for a Responsible Budget (“The Deficit Has Never Been This High When the Economy Was This Strong“) points out that past periods of big deficits were usually accompanied by high unemployment and a large “output gap,” meaning that the economy was operating far below its potential because a big share of the workforce, and swaths of manufacturing capacity, stood idle.

The CRFB notes that at the time of the 1992 recession, the unemployment rate was 7.4%, the output gap reached 3.5%, and GDP had contracted slightly the previous year, factors that drove the deficit up to 4.5% of GDP. In 2009, the U.S. had a jobless reading of 8.5%, an output gap of 5.9%, and a no-growth economy that pushed deficits to 9.8% of GDP, a number inflated by a wave of emergency spending.

By contrast, today a record-low 3.4% of the workforce is unemployed, the economy is operating above potential, and growth last year exceeded 3%. Yet the deficit is projected to jump from 3.9% this year to 4.6% next year, with higher numbers to come. “Those numbers show that fast growth cannot wash away the deficit, and that deficits will keep getting bigger even at 3% growth,” says Marc Goldwein, CRFB’s senior policy director.

What’s really scary, says Goldwein, is that the CBO projects that the rate of U.S. economic expansion will drop below 2% by 2020, and stay in the sub-2% range for the next eight years. As he points out, growth in the range the CBO projects would drive deficits to over $ 1.5 trillion by 2028, and push the ratio of total outstanding federal debt to GDP to around 100%, an extremely dangerous number.

As Goldwein acknowledges, the U.S. could keep piling on seemingly unsustainable debt and deficits for years, without triggering a financial crisis. “You don’t know if a crisis will come next year, or far in the future,” he says. “What you do know is that even now, the deficits are curbing growth.”

The U.S. must issue gigantic volumes of Treasury bills and bonds to fund the deficits, and many investors and companies purchase those safe securities instead of channeling that money into entrepreneurial ventures, or providing private enterprises with fresh capital for new plants and data centers. Each year, Goldwein says, deficits divert an estimated $ 5 trillion a year that could be spurring private enterprises into Treasuries, slightly lowering growth year after year in a cycle that will make the U.S. economy significantly smaller in a decade than if deficits were shrinking.

Big and growing deficits pose a second near-term threat, even if the U.S. avoids a funding crisis. Growing interest payments will crowd out spending that’s needed for social programs. “Government interest payments next year will exceed everything the federal government spends on children, including child tax credits, school lunches and the like,” says Goldwein. “That means we’ll spend more for the past generation than investing in the future generation.” By 2028, the CBO projects, interest on the debt could reach $ 1 trillion, or more than one dollar in eight of all spending, versus one in thirteen in 2018.

Why deficits aren’t going away

The deficit’s big driver is demographics. Even if the economy expanded at 3% or more a year, revenues wouldn’t remotely rise fast enough to cover exploding healthcare and retirement costs for the fast-growing population of seniors. Nevertheless, recent, mainly misguided, legislation is making the problem a lot worse. The budget agreement of 2018 that expanded both military and domestic spending, and 2017 tax bill, will add a combined $ 420 billion to the 2019 deficit; if those measures hadn’t been enacted, the shortfall would be just 2.6% of GDP.

Goldwein fears that the Trump administration and Congress will reach another budget-busting compromise this year. Both parties are championing a big infrastructure deal. President Trump advocates financing the new outlays by raising the gasoline tax; the Democrats want to lift levies on the rich. It’s probable that the two sides will deadlock on raising revenues, and enact the new spending sans funding, adding even more to the deficit.

The outlook isn’t all bleak. The Trump administration is advancing a number of promising proposals to attack galloping healthcare costs. It’s seeking legislation to reduce pay for doctors employed by hospitals to the scale that applies to private physicians. Trump also seeks to shift enrollees in Medicare Part D to cheaper generic drugs, and to start negotiating lower prices on pharmaceuticals prescribed by private physicians under Medicare Part B. Another promising area is removing loopholes from the huge new deduction granted to small businesses, by eliminating incentives for individuals to register as self-employed in order to avoid taxes.

Those reforms would help. But only radical entitlement reform, a big new source of revenue, or a combination of the two, can tame future deficits, and forestall a looming funding crisis.

A few years ago, I wrote a piece citing two figures who agree on almost nothing. Paul Ryan (in his pre-speaker days) and economist-pundit Paul Krugman, both contended that if nothing is done to restrain spending, America may turn to a European-style value-added tax (VAT). Unsurprisingly, Ryan despised that course, and Krugman embraced it. “We could get a funding crisis, and Democrats will claim that that only a VAT will save the country,” Ryan told me.

Goldwein agrees that a VAT may be in American’s future. “The longer we wait, the more likely a VAT,” he says. The shame is that because Congress and the Administration are refusing to act, America may be forced into a solution that will take the pressure from where it should be––cutting spending––and permanently raise the size of government. In the process, a VAT could cap expansion of the private sector that funds that government. That’s the price America may pay for years of profligate spending, unfunded tax cuts, and fiddling in the face of fiscal disaster.