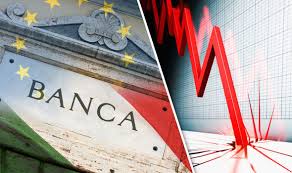 Italy Is Heading for Recession in 2019. Here’s Why

Italy’s manufacturing sector shrank for a third straight month in the latest sign that Europe’s third-largest economy is on the brink of yet another recession.

IHS Markit’s gauge of factory activity came in at 49.2 for December. While that’s better than the 48.4 forecast by economists, it’s still below 50 — the dividing line between growth and contraction — and measures of employment and business confidence worsened.

The country was rocked in 2018 by the populist government’s heavy spending plans, which sparked a spat with the European Union and pushed up bond yields. The standoff was resolved at the final hour but unease remains amid a euro-area economic slowdown, less monetary support from the European Central Bank and U.S.-led protectionism.

Italy’s poor performance in December and the first contraction in French manufacturing since 2016 — amid protests by the so-called Yellow Vests — weighed on momentum in the euro area. The PMI for the region declined to its lowest in just over four years, with business confidence reaching its worst since 2012.

China is already suffering from the consequences of trade tariffs. Factory output contracted in December, with a PMI reading on Wednesday reaching the lowest in 19 months. Asian and European stocks dropped.

The IHS Markit report for Italy showed business sentiment at the weakest in six years and employment growth at the slowest in four years. New orders slid for a fifth month, prompting manufacturers to scale back production.

It’s a “worrying end to the year for Italian manufacturers,” said Andrew Harker, associate director at IHS Markit. “There appears little sense of optimism that the current soft patch will come to an end in the near future.”

The uneasy coalition between the anti-migration League, which is strongest in the business-rich north, and the anti-establishment Five Star Movement, with its electoral base in the depressed south, makes further political uncertainty possible in 2019.

In his year-end address, Italian President Sergio Mattarella took the government to task for ramming spending plans through parliament, urging both parties to ensure adequate debate in the future.

Italy’s woes highlight how the eurozone — which marked the 20th anniversary of the single currency on Tuesday — is still struggling to deliver convergence.

The nation’s economy has persistently lagged behind the rest of the bloc and shrank 0.1 percent in the third quarter. A contraction in the final three months of the year would confirm the nation’s third recession since the global financial crisis a decade ago.