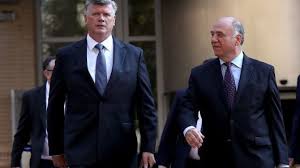 Trump, Democrats spar over shutdown with no deal in sight

WASHINGTON (Reuters) – President Donald Trump and top Democrats in Congress sparred over the partial shutdown of the U.S. government on Monday, with no sign of tangible efforts to reopen agencies closed by a political impasse over Trump’s demand for border wall funds.

Senate Democratic leader Chuck Schumer and his counterpart in the House of Representatives, Nancy Pelosi, accused Trump of being under the sway of conservative House Republicans and blasted the White House for saying “different things about what the president would accept or not accept.”

“It’s Christmas Eve and President Trump is plunging the country into chaos,” Schumer and Pelosi said in a joint statement as the shutdown dragged through a third day.

“Meanwhile, different people from the same White House are saying different things about what the president would accept or not accept to end his Trump Shutdown, making it impossible to know where they stand at any given moment,” they said.

The White House did not respond to a request for comment.

Late on Monday, in a White House appearance where he talked with children by telephone about Christmas and Santa Claus, Trump was asked by reporters if there had been any progress in talks about funding the government.

Trump, who cancelled plans to go to his Florida resort on Friday for Christmas because of the shutdown, was scheduled to discuss border security with U.S. homeland security officials on Monday afternoon.

Afterward, Trump said in a Twitter message: “I am in the Oval Office & just gave out a 115 mile long contract for another large section of the Wall in Texas.”

He gave no details, and the White House did not immediately respond to a request to comment on what he meant.

Earlier the president said on Twitter that he was “all alone (poor me) in the White House waiting for the Democrats to come back and make a deal on desperately needed Border Security.”

On Sunday, a top Trump aide said the shutdown could continue to Jan. 3, when the new Congress convenes and Democrats take control of the House.

Funding for about one-quarter of federal programs – including the departments of Homeland Security, Justice and Agriculture – expired at midnight on Friday.

Without a deal to break the impasse over Trump’s demand for $ 5 billion for a wall along the U.S. border with Mexico, the shutdown is likely to stretch into the new year.

Building the wall was one of Trump’s most frequently repeated campaign promises, but Democrats are vehemently opposed to it.

The Senate adjourned for the Christmas holiday on Saturday as Trump held fast to his demand and Democrats refused to budge.

A day earlier, Republican leaders in the Senate came up short in their effort to win enough support to approve a bill passed by the House that had the wall funds Trump has demanded.

Schumer and Pelosi on Monday lashed out at the House Freedom Caucus, a conservative group that includes some of the president’s most loyal supporters in Congress. Trump discussed border security at a Saturday lunch with Republican lawmakers that included some Freedom Caucus members but no Republican leaders.

“As long as the president is guided by the House Freedom Caucus, it’s hard to see how he can come up with a solution that can pass both the House and Senate and end his Trump Shutdown,” the two Democrats said in their statement.

Over the weekend, Trump budget director and White House acting chief of staff Mick Mulvaney said the White House had made a counter-offer to Democrats on border security funding that fell between a Democratic proposal of $ 1.3 billion and Trump’s much higher demand.

Media reports said Vice President Mike Pence had proposed $ 2.1 billion in funding in a meeting with Schumer on Saturday.