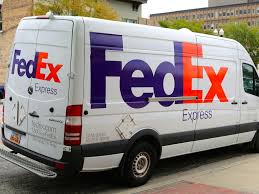 FedEx Stock Plunges 12% as Its 2019 Outlook Sounds an Alarm on Global Trade, Economy

FedEx’s stock tumbled more than 12% Wednesday after warning that global economic growth had peaked and trade disputes could slow down its international delivery business in 2019.

Fedex reported revenue and net income last quarter that exceeded analyst estimates. But shareholders focused on the company’s grim forecast for 2019, which marked a stark reversal of a sunny outlook only three months ago.

“Our international business, especially in Europe, weakened significantly since we last talked with you during our earnings call in September,” CEO Fred Smith said on a conference call discussing earnings with investors. “In addition, China’s economy has weakened due in part to trade disputes.”

FedEx and its rival UPS are seen as bellwethers for global trade as their global delivery networks are enmeshed in the thick of international commerce. Which makes the company’s comments about a global slowdown especially sobering. “Internationally, economic strength seen earlier this year has given way to a slowdown,” chief marketing officer Raj Subramaniam said. “The peak for global economic growth now appears to be behind us.”

The company said its 2019 earnings per share would come in between $ 15.50 and $ 16.60, down from its earlier forecast of a range between $ 17.20 and $ 17.80. FedEx will also speed up cost-cutting measures such as a voluntary employee buyouts and reduced hiring, executives said.

The degree of the earnings revision took analysts by surprise and added to concerns that the global slowdown may be worse than already feared. “We recognize that global growth has slowed but we are very surprised by the magnitude of the headwind, which is what might be seen in a severe recession,” Morgan Stanley analyst Ravi Shanker said in a research note.

Smith didn’t pull his punches in leveling blame at policymakers in various countries. “Most of the issues that we are dealing with today are induced by bad political choices,” Smith said, before listing numerous factors that have slowed demand for shipments: the challenges facing Brexit, an immigration crisis in Germany, China’s “mercantilism,” the trade tariffs imposed by the Trump administration, and the “bad decision about a new tax.”

“So you just go down the list, and they’re all things that have created macroeconomic slowdown,” Smith said. “The good news is, with a change in policy, they could turn it around pretty quick too.”