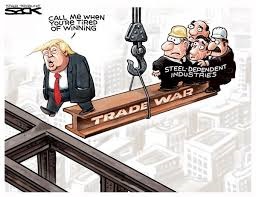 Here come the tariffs. Is a trade war next?

For seven years, CNN’s Freedom Project has worked to help put an end to human trafficking and modern-day slavery.

We’ve had considerable success. We’ve shined the light on many evil deeds in many different parts of the world. But the world’s corporations have a role to play, too.

Delta Air Lines(DAL) has committed its tens of thousands of employees to the goal. They call this a dark topic, and they’re right. Many companies would like to avoid discussion of something as nefarious, sleazy and unpleasant as human trafficking.

Others are rallying to the cause. Airbnb and Uber, two companies with vast global scale, have recognized that they, too, can help. Why? Because the people engaged in this evil often use those companies’ services.

Airbnb, Uber, Delta and other companies are realizing that they hold reservoirs of data that the authorities can tap into to see the schemes, the patterns, the designs, the ways in which human traffickers are using the global economy.

The next move forward in the fight against human trafficking will not be by governments or NGOs. Look to the board rooms. The companies that have real leaders at the table will be easy to spot because those companies will be producing results for us all.

Toys “R” Us is one of several once-beloved retailers to falter, in part because of the rise of Amazon (AMZN). But it can’t blame all its troubles on the e-commerce giant. Before Amazon was a threat, Toys “R” Us amassed mountains of debt and didn’t have the money to invest enough in its stores. That made for an unpleasant shopping experience that helped doom the chain. And the rise of big-box retailers like Target (TGT) and Walmart (WMT) gave toy manufacturers such as Mattel (MAT) and Hasbro (HAS) other options. Last year, they each sold about $ 1 billion worth of their toys at Walmart, more than twice as much as they sold through Toys “R” Us.

Still, people were sad to see the toy store close. On social media, customers mourned the retailer and vowed always to remain Toys “R” Us kids.

The Trump administration is imposing sanctions on Russia for election interference, including people indicted last month by special counsel Robert Mueller. The measures come a month and a half after the administration missed a congressional deadline to issue the penalties. The sanctions include punishments on the Internet Research Agency, a Russian so-called troll farm that produced divisive political posts on American social media platforms during the 2016 presidential election.

Could the US dollar solve Venezuela’s crisis?

Venezuela’s currency has lost nearly all its value as the country spirals further into crisis. One idea to stabilize the economy: Get rid of the bolivar and replace it with the US dollar. Ecuador and El Salvador have done it, and now a presidential candidate is proposing that Venezuela try it to get hyperinflation under control. The idea has both fans and skeptics in Venezuela, but one thing is clear: Something needs to change. Venezuelans are living through severe shortages of food and medicine brought on by President Nicolas Maduro’s economic policies.

President Trump has picked Larry Kudlow, the CNBC personality and former Reagan administration official, to replace Gary Cohn as chief economic adviser. Will Kudlow butt heads with the president the way his predecessor did? Kudlow is staunchly for free trade. He and two other economists warned in an op-ed for CNBC that steel and aluminum tariffs will effectively be taxes on Americans and could lead to massive job losses. Kudlow said this about his new boss last December: “He’s never been good on trade.” He’s also said that Trump, unlike Reagan, focuses too much on the stock market instead of the broader economy. But there is one thing Kudlow and Trump agree on: They think tax cuts will be good for businesses and Americans.

The US Senate passed sweeping changes to the Dodd-Frank banking bill, adopted in the wake of the 2008 financial crisis.

Goldman Sachs(GS)’ next CEO is a part-time electronic dance DJ.

GE(GE) will not pay its top leaders bonuses this year because of the company’s “poor performance.”

G20: Representatives of 20 nations will gather in Buenos Aires on Monday and Tuesday to discuss some of the biggest issues facing the global economy. Trade, tariffs, cryptocurrencies and exchange rates are expected to dominate the conversation. The United States is set to impose steep tariffs on steel and aluminum Thursday.

AT&T-Time Warner antitrust case: Opening arguments are scheduled for Wednesday in the Justice Department’s lawsuit to block AT&T (T)’s purchase of CNN parent company Time Warner (TWX). It will be the most significant antitrust trial in recent memory.