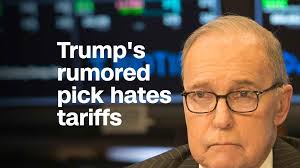 What Larry Kudlow thinks about trade, taxes, stocks and recessions

It’s starting to look like President Trump will name CNBC commentator Larry Kudlow to replace Gary Cohn as the head of his National Economic Council. Trump even said Tuesday there was a “very good chance” Kudlow would get the job.
It’s a pick that Wall Street will probably like, but it’s also one that might be at odds with the increasingly protectionist economic stance that Trump has taken lately.

In fact, Kudlow co-wrote an editorial for CNBC and the National Review earlier this month with prominent economists Arthur Laffer and Stephen Moore, a CNN contributor, urging Trump to consider that tariffs will wind up as taxes on American consumers.

They added that the tariffs could also lead to massive job losses.

Kudlow, Laffer and Moore wrote that “we are imposing sanctions on our own country, putting up tariffs supposedly to make Americans more prosperous. If ever there were a crisis of logic, this is it.”

They also said that the tariffs “put at risk 5 million jobs in industries that use steel” and that “steel-and-aluminum users and consumers lose.”

To be sure, Kudlow has defended Trump on other economic policy issues, particularly the recent tax cuts.

Kudlow is a fan of tax cuts, but…

Kudlow wrote last December for CNBC that “Trump and the GOP are on the side of the growth angels with the passage of powerful tax-cut legislation to boost business investment, wages, and take-home family pay. The Democrats, meanwhile, are left with stale class-warfare slogans about tax cuts for the rich.”

But Kudlow ended his comments with this zinger about Trump. “He’s never been good on trade.”

…Kudlow worries Trump is watching stock market too much

Kudlow also recently warned Trump to stop obsessing about the stock market so much. He even noted that when he was in the Reagan administration, Reagan focused more on the broader economy — even after the infamous Black Monday Wall Street plunge of October 1987.

“During the 1987 crash, Reagan went out there and said that the economy is fundamentally sound. And he was right, and the market rebounded,” Kudlow said on CNBC after stocks plunged in February following the January jobs report.

“If I were the Trump team, I would talk about that in fact, the economy is improving. And that’s all there is to it,” he added. (Has Trump been listening? It’s worth noting that the president has avoided talking about the market on Twitter for the past few weeks.)

‘Recessions are therapeutic?’ — Not something Kudlow should say in DC

Kudlow has also said things in some opinion pieces for CNBC about the economy that he probably won’t be able to utter in public if he takes a job in the Trump White House.

He wrote in April 2000 as the economy was in the midst of the Great Recession that “recessions are part of capitalism. They happen every so often.”

Kudlow added that “recessions are therapeutic. They’re even necessary to create the foundations for the next recovery. Economic excesses always occur in free-market capitalist economies, and from time to time they must be cleansed.”

He’s not wrong about that. But that plainspoken type of talk is fine when you are a commentator for a TV network. It doesn’t usually work so well in Washington though.