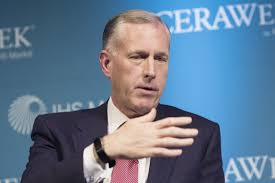 After the mega merger, chemicals giant DowDuPont, with nearly 340 years of history between them, is ready to open a new chapter by announcing the retirement of CEO Andrew Liveris and designating an openly-gay executive to the largest of its three spinoffs.

On Monday, DowDuPont announced plans to make Jim Fitterling, currently chief operating officer for the firm’s materials sciences unit, CEO of that sector upon its separation, expected in the first quarter of 2019.

“I am very excited and humbled to lead Dow into its next phase of growth,” said Fitterling in a statement.

That comes after Dow and Dupont completed their $ 130 billion merger in 2017, amid pressure from activist investors including Nelson Peltz and Third Point’s Dan Loeb to merge and break into smaller pieces. DowDupont eventually decided to break into three: material sciences, speciality products, and agriculture businesses.

Here’s what there is to know about Fitterling.

He has a long history with Dow
Fitterling, now 56, has spent his entire career with Dow.

In recent years, Fitterling has overseen areas including Dow’s environment, health and safety, sustainability, and research and development divisions.

For his role in the company, Fitterling has made millions
According to the most recent data from the Securities and Exchange Commission, Fitterling made about $ 10.1 million in 2016, nearly half of which came from stock awards. That made him the second- highest earning executive at Dow that year behind CEO Andrew Liveris, who received $ 23 million.

He is taking over the largest of the three DowDupont spinoffs
DowDupont is expected to spin off into three separate divisions: materials science, specialty products, and agriculture. The splits are expected to begin with the materials science business in early 2019, followed by the other two later that year.

With the spinoffs, Fitterling is expected to take over the largest of the three businesses by revenue, in other words, the highest ranking one on the Fortune 500.

“Yes, the materials science division (the new Dow) will be the largest of the three,” Jarrod Erpelding, a spokesperson for Dow said in an email.

In 2017, that division, which included packaging and infrastructure, represented over 50% of DowDupont’s combined sales on a pro forma basis, or nearly $ 44 billion.

Fitterling would be one of a handful of openly-gay CEOs running a multi-billion dollar company by revenue
Fitterling came out to Dow’s employees in 2014, after spending nearly thirty years keeping the workforce in the dark.

The announcement came in the same year that Tim Cook became the first openly-gay Fortune 500 CEO.

Inga Beales, CEO of Lloyd’s of London, is notable for being a bisexual executive helming a company in the Fortune Global 500.

Fitterling has weighed in on President Donald Trump’s proposed steel and aluminum tariffs
Wall Street has not taken news of import duties on steel and aluminum lightly. Nor has Fitterling, who says the company has told the Trump administration of its misgivings regarding the proposed taxes.

Roughly a week earlier, Fitterling warned that such tariffs could lead the company to build new plants in Canada or Argentina instead of the U.S.—a blow to President Trump’s “America First” platform.

“You eventually get yourself to the point where you are saying, ‘Should I really be building that here or somewhere else?’ ” Fitterling said Tuesday, according to Bloomberg. “We’ve got opportunities in other places like Canada, like Argentina. All of them right now are on the radar screen.”

With an increase in steel prices, the cost of building in the U.S. will also grow, the executive noted. DowDupont is expecting yet another $ 6 billion-worth of U.S. projects in coming months.