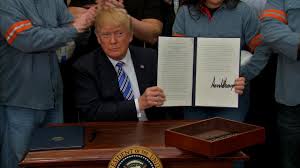 Here come the tariffs. Is a trade war next?

Here come the tariffs. Is a trade war next?
President Trump signed an order Thursday imposing tariffs on steel and aluminum from nearly all countries, raising fears of a trade war. Trump exempted Mexico and Canada — for now. But if NAFTA talks keep moving at a sluggish pace, Trump warned, those countries could be hit, too. From China to the European Union, the tariffs are expected to be met with retaliation against US goods. Many American industries are worried about being caught in the crossfire. Meanwhile, 11 nations revived and officially signed the Trans-Pacific Partnership, a sweeping trade agreement that was considered dead when Trump pulled the United States out last year. — Patrick Gillespie

Goldman Sachs CEO Lloyd Blankfein (left) smiling with Gary Cohn, who stepped down as the firm’s president and chief operating officer to become President Trump’s top economic adviser.
Of all the high-profile exits from the White House, none mattered to Wall Street quite like the abrupt resignation of Gary Cohn. The presence of Cohn, a former top Goldman Sachs (GS) exec who served as Trump’s top economic adviser, long comforted investors. Wall Street viewed him as a powerful angel on Trump’s shoulder, guarding against dangerous policy ideas. Cohn’s resignation immediately raised jitters about Trump’s trade policies, especially on tariffs. And investors may be left with less confidence in Trump’s entire economic agenda. Or as Cowen’s Chris Krueger put it: “Wall Street just lost its security blanket.” -— Matt Egan

Cigna’s plan to buy pharmacy benefits manager Express Scripts (ESRX) comes three months after CVS (CVS) agreed to buy Aetna (AET), a Cigna (CI) rival. The Cigna deal also follows the bombshell news from Amazon (AMZN), Berkshire Hathaway (BRKA) and JPMorgan Chase (JPM) about plans to set up a health insurer for their workers. Big insurers may need to bulk up to take on Amazon, which is said to be looking to get into the banking biz itself. Still, it’s not clear whether regulators will approve the Cigna-Express Scripts or CVS-Aetna deals. The proposed Cigna-Anthem (ANTX) and Aetna-Humana (HUM) mergers were scrapped last year after the government said it would block them. — Paul R .La Monica

Will Italy get a universal basic income? Don’t count on it

The populist party Five Star Movement, or M5S, scooped up the most votes in Italy’s election on Monday. The group made a bold campaign promise: a guaranteed monthly income of €780, or $ 960, for everyone. That’s probably not going to happen. It’ll be hard for M5S to get enough votes to pass such a radical policy. And Italy, with its massive government debt, simply can’t afford the program. “They just don’t have the money for it,” said Carsten Hesse, European economist at Berenberg. — Danielle Wiener-Bronner

Brexit could threaten London’s status as a global financial center if the EU gets its way.

Lego sales have dropped for the first time in 13 years because kids have way too many Legos.

Far from soothing fears of a trade war, Trump’s tariff exemptions could make the situation worse.

A top JPMorgan Chase executive is warning that stocks could fall as much as 40% in the next few years.

McDonald’s(MCD) Quarter Pounders will be made with fresh beef and without added preservatives starting in May — in all states except Hawaii and Alaska.

Brands are leaning into International Women’s Day — and using it as an opportunity to broadcast their commitment to gender equality.

Richard Quest is off this week.