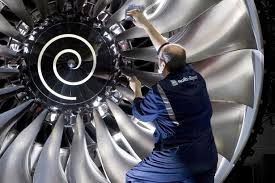 Rolls-Royce Doubles Down on Job Cuts Amid Rising Profits

East has already eliminated around 600 senior managers, as well as thousands of workers at Rolls’s main aerospace business and in its marine arm, which may be sold. While the measures are boosting margins, the CEO — who took over in 2015 — has expressed frustration at the slow pace of change, compounded by performance issues on key engine programs.

“The reality is that there is more simplification that we need to do to make ourselves truly competitive,” East said on a conference call. “We are embarking on a more fundamental restructuring program with a refreshed leadership team and an improved market environment.”

White-Collar Cuts
East said the latest restructuring effort will eliminate remaining duplication within management. He declined to say how many jobs will be affected, though the focus will be on white-collar staff rather than engineers and technicians.

Bringing in Alvarez & Marsal is a bold move, with the firm having built its reputation by advising on the wholesale restructuring and bankruptcies of companies including Lehman Brothers. Founded by Tony Alvarez and Bryan Marsal in 1983, the company says on its website that it has a reputation for “asking tough questions” and “getting our hands dirty.”

Rolls-Royce’s underlying pretax profit surged to 1.07 billion pounds ($ 1.5 billion) in 2017, according to a statement, easily beating the 889 million-pound average prediction of 11 analysts, while free cash flow more than doubled.

The strong performance of the Germany-based power-systems arm, buoyed by sales to the construction and agriculture industries, helped mask the impact of operational problems with engines built for two marquee jetliners.

Rolls-Royce Conjures Gold From a Big Lump of Not Very Much: Gadfly

In particular, the Trent 1000 that powers Boeing Co.’s 787 Dreamliner and the Trent 900, which is used on the Airbus SE A380 superjumbo, have experienced “durability issues” with a small number of parts. In some cases the problems have required turbines to be removed for repairs, leading to disruption for customers and a 170 million-pound hit on cash flow.

The cash impact could double this year as maintenance activity peaks, though some parts are having to be redesigned and work won’t be completed until 2022. Those costs are including in the current outlook and Rolls still expects to achieve a target of posting 1 billion pounds in free cash flow by 2020.