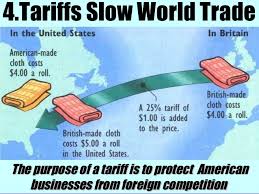 Did Trade Tariffs Cause the Great Depression?

Donald Trump stunned the world last Thursday with his reportedly impulsive announcement of steep U.S. tariffs on steel and aluminum. Stock markets responded by dropping sharply around the world — and that was before Trump doubled down by threatening to impose tariffs on European cars.

Both stock markets and economists tend to loathe tariffs, which hamper the basic efficiency of the market, rarely accomplishing more than saving a few jobs in exchange for higher prices across the entire economy. One illustration of this that’s not as widely known as it should be is the role of tariffs, specifically a set of rules known as the Smoot-Hawley Tariff Act, in triggering the Great Depression.

Obviously, the causes of the Depression are still hotly debated, and popular understanding centers on the 1929 stock market crash, while the somewhat more informed will cite excessive easy credit and misguided tight monetary policies by the Federal Reserve. Smoot-Hawley wasn’t signed into law until June 17, 1930, when stocks had already plunged from 1929 peaks, so it’s often seen as a secondary factor.

But a closer look shows that timeline is misleading. In a 1979 National Review analysis of the causes of the Depression reprinted by the Cato Institute, author Alan Reynolds argued that Smoot-Hawley was an ongoing drag on the economy. More than that, though, he thought it substantially contributed to the stock market collapse of 1929, because traders saw it coming.

His argument is compelling — and, as an indicator of the possible fallout of the Trump tariffs, scary.

Smoot-Hawley, Reynolds points out, passed the House in May 1929, and stocks were battered every time the act moved through the legislative process. On Oct. 23 of that year, a Wednesday, it became clear the tariffs would be much broader than first believed.

The very next day, of course, was Black Thursday. Markets dropped 9% in a day and kicked off a yearslong stock meltdown.

As Reynolds sums up, “market participants do not wait for a major law to pass” before retrenching their positions. In 1929, they were right to sell. Smoot-Hawley ultimately raised tariffs on tens of thousands of products, and trade policy analyst Bill Krist points out that by the end of 1934, global trade had tanked by 66% from 1929 levels.

The parallels to the current moment are distressing. The Trump tariffs are not in effect yet, and so far they are officially limited to steel and aluminum. But in coming days, stock traders will be acting on their beliefs about what the future will bring. There are signals, just as there were in 1929, that tariffs could expand from their modest start — U.S. trade partners have already said they will retaliate if tariffs go into effect, while President Trump posits that “trade wars are good.”

Even if we accept arguments like Reynolds’, tariffs were just one factor in the Depression, and most of the others aren’t substantial now. But history has provided us with a strong cautionary lesson about the real impact of tariffs, and the stock market is likely to heed it.