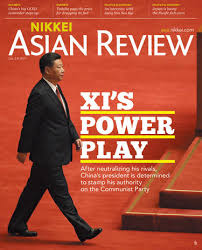 Chinese President Xi Jinping’s bid to remain in power indefinitely has made one group of people happy: shareholders in companies with “emperor” in their names.
The ruling Communist Party wants to change China’s constitution so that presidents no longer have to step down after two consecutive terms. Since the news broke at the weekend, analysts have debated what it might mean for the future of China. Leading Chinese dissidents say Xi is trying to become a new “emperor.”

Chinese investors didn’t wait to find out, and piled into stocks with any kind of link to the word.

Shenzhen Emperor Technology, a company that makes smart cards and payment terminals for railways, saw its stock shoot up more than 7% on Monday. Anhui Yingjia Distillery, a Chinese liquor company whose name includes the phrase “greeting the emperor’s carriage,” closed 2% higher after rising more than 4% in early trade.

Analysts said sharp stock moves based on words or phrases in the news aren’t uncommon in China.

“There are many strange coincidences in the Chinese market … when there’s an association with the names,” said Hong Hao, head of research at China’s Bank of Communications.

Other Chinese firms with the title in their name, like kitchen appliance maker Vatti (“Chinese emperor”) and meat processing firm Huangshanghuang (“the emperor of emperors”) also posted big gains early in the day.

“It’s just like during the dotcom era, when you had the name dotcom in your company name, then you’d tend to go up,” said Hong, who also drew parallels with recent sharp gains for companies with the word “blockchain” in their name.

“But whether these gains can hold is an entirely different story.”

The “emperor” stocks were already showing signs of slipping — all of them had lost at least half their early gains by the time Chinese markets closed on Monday.

Experts have warned that Xi’s consolidation of power could be bad for China’s fast-growing economy. The term limit change is still subject to a vote by China’s National People’s Congress next month, but its passage is widely considered a foregone conclusion.

The proposal “is the clearest sign yet that Xi Jinping is reversing China’s reform era shift toward more institutionalised and rule-based politics,” economists at Capital Economics wrote in a research note Monday.

“The quality of economic policy making is likely to suffer as a result,” they added.