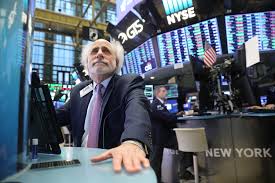 What Drove Stocks Into Correction Territory, According to Investors

Like everything in markets, this defies easy narratives. Is it rising yields, hedge funds selling out of arcane positions, inflated valuations bursting or none of the above? After two days of relative peace, investors theorized on what drove U.S. stocks into correction territory.

The Rate Wringer
Chris Rupkey, chief financial economist at MUFG Union Bank: “The era of low interest rates is at an end which means the proverbial punch in the punch bowl is leaving the party. And fast! The stock market is a leading economic indicator and right now it points the way for the economy straight down. There is no way the Federal Reserve is going to raise interest rates at Powell’s first meeting as chair in March. They aren’t that crazy.”

Correlated Pain
Eric Liu, head of research, Vanda Research:“The underlying drivers of risk aversion appear to have shifted once more. The ‘old fashioned’ risk-off environment that we witnessed at the start of the week — with stocks and bonds moving in opposite directions — seems to have subsided. Instead the market environment over the past 24 hours has mimicked last week’s pattern, with yields rising and stocks falling. Some things can’t be undone, however. Large shocks to the system tend to have a resetting effect, throwing hitherto rock-solid asset price correlations in disarray and reversing long-running trends.”

Flight to Safety
Peter Jankovskis, co-chief investment officer, Oakbrook Investments LLC: “There was definitely a flight-to safety component. If you look in terms of how various sectors performed, the sector that held up the best was utilities, followed by staples. The market worked its way to 2 percent and held there pretty well, and then all of a sudden in the last half hour or so took a bid dive at the end. There is a chance that might build for a base for a recovery tomorrow. Breaking the 10 percent correction, that may encourage people to try to put their toes back in the market. We need to see what sort of follow through we have in Asia and Europe.”

Hedge Funds
Stephen Carl, head trader at Williams Capital Group: “Whatever trigger points hedge funds and money managers have, they are acting on it now. They can’t stand still. The session’s ending, the morning is going to be unknown, you have a potential shutdown on the brink as well, so that played out as well. But then, traders are bracing for Friday, the last day before a weekend. You saw a heavy selloff on Friday last week. The thinking is, if the market isn’t stable tomorrow there might be some additional selloff later in the day, like today.”

New Regime
Chad Morganlander, a portfolio manager at Washington Crossing Advisors, said by phone. “This is sell first, think about it later. The reality is, it’s been 10 years, and a lot of people that are in the market today have had ten years of a Federal Reserve that has artificially repressed volatility. And as they step away from that, reality starts to kick back in. There’s been a 10-year fantasy land that investors have been living in. And that’s a fairy tale that’s about to end.”