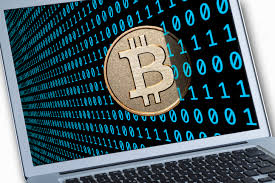 As the Dow Jones industrial average continued seesawing Tuesday after plunging a record 1,175 points the previous day, the heads of the U.S. Securities and Exchange Commission and Commodity Futures Trading Commission were on Capitol Hill answering lawmakers’ questions about the risks posed by another highly volatile asset class: cryptocurrencies such as Bitcoin.

Bitcoin, which last year skyrocketed some 1,800% to nearly $ 20,000, has been in a free-fall since December, with cryptocurrencies as a whole losing hundreds of billions of dollars in value. A report last week from Citi’s private banking division referred to cryptocurrencies as “the most volatile asset class”—far more volatile than S&P 500 stocks or gold, which for months had largely been humming along, reacting surprisingly little to major news events.

But that all changed this week, SEC chairman Jay Clayton noted in Tuesday’s Senate banking committee hearing. When the Dow swooned 4.6% Monday, it spurred an even more extreme move in the so-called Wall Street fear gauge: the CBOE Volatility Index, also known as the VIX, spiked nearly 116% that day, then rose as much as another 37% Tuesday to its highest point in years—only to end the day down almost 20%. It was the widest swing in the history of the VIX, according to the Wall Street Journal’s market data group.

Given that backdrop, the regulators at the Senate hearing downplayed lawmakers’ concerns over Bitcoin’s “extreme price volatility.”

“Just recently the volatility in Bitcoin was not as great as the volatility we’ve seen in other securities, such as the VIX product,” Clayton retorted.

Indeed, the short-term volatility of the VIX index itself surged to a whopping 464 Tuesday, nearly quadruple Bitcoin’s volatility, which clocked in at 124, according to Bloomberg data.

While all major U.S. stock market indexes ultimately bounced back Tuesday, with the Dow up 567 points, or 2.3%, it was a rollercoaster day of ups and downs, making volatility even higher than it was during Monday’s pullback. Still, volatility in the VIX index, which measures market expectations for volatility in the near future (based on S&P 500 option prices), was much greater than the volatility of actual stocks.

Volatility for the Dow itself, for example, rose to only 33.5, while Nvidia (nvda), a semiconductor stock which also wavered between green and red throughout the day, had short-term volatility of 66. That’s a fraction of the VIX index’s volatility, and also far more subdued than Bitcoin, whose lowest volatility so far in 2018 measured 78.

Though the VIX does not reflect the underlying value of the stock market, it still serves as an important sentiment indicator for investors, who also use derivatives of the volatility index to hedge their stock bets. But that backfired on some investors this week, who were betting against a rise in volatility through products such as the VelocityShares Daily Inverse VIX Short-Term exchange-traded note (xiv). With the sudden spike in the VIX, 85% of the value of that product (also known as the XIV) was wiped out overnight, forcing Credit Suisse to shut it down permanently, according to CNBC.

The experience left investors so sour on VIX-related products that the stock of CBOE (cboe), the provider of the volatility index, sank more than 10% Tuesday.

On the other hand, Bitcoin investors still have an effective way to protect against the cryptocurrency’s volatility, Chairman Clayton added: Bitcoin futures. That was part of the rationale for the CFTC’s approval last year of several Bitcoin futures products, which began trading in December.

“That’s one thing the merchant of a futures product is meant to do,” Clayton said, “to provide those who are exposed to that volatility a means of hedging and mitigating the risk.”