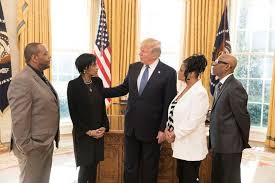 Trump wants to fix ‘injustice’ of high drug prices. But can he?

During his State of the Union address Tuesday night, President Trump said that he wants his administration “to make fixing the injustice of high drug prices one of our top priorities.”
“Prices will come down,” Trump said matter-of-factly.

That seems to be spooking health care investors Wednesday.

Shares of Eli Lilly (LLY) fell despite reporting better-than-expected earnings and solid guidance. Dow components Merck (MRK) and Johnson & Johnson (JNJ) dipped too, even as the broader market bounced back from its two-day losing streak.

“One thing that jumped out from the State of the Union was the tough talk on prescription drugs — the ‘fixing the injustice’ quote,” said Ben Phillips, chief investment officer of EventShares. Phillips’ firm runs ETFs that cater investments to specific political policies — it has a Republican Policies Fund and Democratic Policies Fund.

The Republican ETF, which unsurprisingly has the ticker symbol GOP, (GOP) owns only one health care stock: biotech Gillead Science (GILD). Phillips said the lack of drug stocks in the GOP fund is largely because of Trump’s comments about the industry.

Anger about rising prescription costs was one view Trump shared in common with his opponent Hillary Clinton — and it was a key reason why Pfizer (PFE), Novartis (NVS), Bristol-Myers Squibb (BMY) and other drug stocks plunged in the months leading up to the election.

But these and many other pharmaceutical and biotech stocks came roaring back since Trump was inaugurated just over a year ago. That’s largely due to the fact that Trump didn’t really follow suit on his promise to go after the drug makers.

If anything, Trump’s push to undo much of President Obama’s Affordable Care Act sent the signal to investors and drug companies that he was not really all that interested in upending the business model of the health care industry.

That’s why some think Trump’s tough talk won’t amount to anything.

Attacking drug companies is an easy way to get people to clap — no matter what party you belong to. Remember the bipartisan outrage about “pharma bro” Martin Shkreli during the 2016 campaign?

“There are not many issues you can get Republicans and Democrats to agree on but high drug prices is one of them. But there has been a lot of talk and not much action. This could be just a throw-away line that gets applause,” said Chris Zaccarelli, chief investment officer of Independent Advisor Alliance.

Skeptics also point out that the new head of the Department of Health and Human Services, former Eli Lilly executive Alex Azar, may not exactly be motivated to go after Big Pharma either.

“The president loves to hammer the drug industry for high prices while pledging that lower prices are coming thanks to his administration. Will his choice of a former drug industry executive, Alex Azar, now the head of Health and Human Services, deliver results on that front?” asked Mark Hamrick, Bankrate.com’s senior economic analyst, in a report.

Both Zaccarelli and Hamrick think that if drug prices do eventually come down, it will be a result of big employers — and not the federal government — pushing for changes.

Currently, the price of prescription medications is largely a function of negotiations between the drugmakers and insurers and pharmacy benefits management companies.

That may be changing. The surprise announcement Tuesday by megabank JPMorgan Chase (JPM), Amazon (AMZN) and Warren Buffett’s Berkshire Hathaway (BRKB) about plans to develop a new insurance program for their workers could rattle the industry.

“The private sector is far more motivated to bring prices down,” Zaccarelli said.

“Large employers have a greater ability to create changes for their workers. Drug stocks are selling off today. But is it because of Trump or concerns about the new Big Three partnership?” he added.

“I’d prefer to place my bet on the partnership just announced by Berkshire Hathaway, JPMorgan Chase and Amazon.com,” he said. “The burgeoning costs of health care are creating a financial stranglehold on the U.S. economy and Americans.”