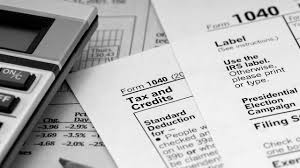 Planes and a helping hand from tax cuts accounted for 94% of the Dow Jones Industrial average’s rise Wednesday—breaking the stock market index’s worst losing streak yet in the age of President Donald Trump.

On Wednesday, one of biggest U.S. defense contractors, Boeing (ba), jumped 6% in trading after posting earnings that beat analyst estimates. The cause: A rise in plane deliveries as well as lower corporate tax rates stemming from reforms recently passed in Congress.

Boeing reported adjusted earnings of $ 4.80 per share, $ 1.74 of which came from the tax cuts during the fourth quarter. Revenue also rose to $ 25.4 billion. Even without the tax cuts, Boeing would have exceeded expectations, with analysts estimating earnings would reach about $ 2.90 per share on revenues of $ 24.7 billion. The company also gave investors even more reason to be cheery, saying it expects the tax cuts to continue boosting its bottom line in future quarters. In the fourth quarter, 13% more (209) commercial airplanes were delivered when compared to the same period a year earlier.

Boeing’s earnings win also cast a rosier look on the markets. Thanks to Boeing’s high stock price of $ 356, it has the greatest influence among the 30 stocks on the Dow Jones Industrial average. Investors woke up on Wednesday to see a market in the green after two days of declines. The Dow has fallen roughly 2% in the past two days—its worst loss since mid-2016, partly due to slightly higher bond yields, and strangely enough, Amazon.

While concerns about iPhone maker Apple’s upcoming earnings certainly helped dampen stocks, on the Dow it’s UnitedHealth Group that holds much more weight over the index’s calculation because of its higher stock price. On Tuesday, shares of the health insurer slid upon news that Amazon, Berkshire Hathaway, and J.P. Morgan were forming a not-for-profit health care venture to lower costs for employees. UnitedHealth’s fall accounted for about 15% of the Dow’s loss during the last two days.

So as Boeing rose, the Dow also jumped 0.5% to 26,222, ending the selloff that has kept investors on their toes. On Wednesday, Boeing accounted for an outsized 94% of the stock market index’s rise. The red-hot stock has also accounted for most of the Dow’s rise over the past year, about 21%.