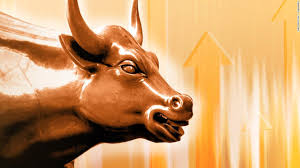 A bond sell-off could be ‘Armageddon’ for the market

The stock market keeps hitting record highs because of a potent cocktail of strong earnings and solid global economic growth. The corporate tax cut is a nice little chaser.
But some experts are increasingly concerned that the hangover will be a doozy.

They worry that U.S. bond yields will rise much more dramatically than Wall Street expects. That could force the Federal Reserve to raise interest rates more aggressively to fight inflation — and stop the market rally, slow the economy and make it more expensive for people and businesses to get loans.

A sell-off in bonds could be “the Armageddon event for this year,” Naeem Aslam, chief market analyst for Think Markets UK, wrote in a report Tuesday.

Analysts worry that China will slow its purchases of American bonds. That would push yields higher because rates go up as bond prices go down.

The Bank of Japan has also been buying less in Japanese bonds — a sign that many countries are looking to end financial crisis-era stimulus measures. That, too, should push yields on Treasury bonds and other global bonds higher.

Related: Dow 26,000 — the stock market is a runaway freight train

Bill Gross, manager of the Janus Henderson Global Unconstrained Bond, wrote earlier this month that “tax cuts and increasing budget deficits” will boost inflation. He told Bloomberg last week that he’s betting against bonds because he thinks a bear market has begun.

And Jeffrey Gundlach, chief executive of DoubleLine Capital, said in a webcast last week that the market has been levitated by the Fed and other central banks using bond purchases — a strategy known as quantitative easing — to keep rates low.

But Gundlach said he thinks that era is over. He thinks bond yields will start to spike later this year and that it will spook investors. Gundlach is even predicting that the S&P 500, which soared nearly 20% in 2017, will finish the year in the red because of bond market and inflation jitters.

Tax reform could make the inflation problem even worse. Some analysts argued that the economy didn’t need stimulating at a time when the economy was already strong and the stock market was roaring.

Paul Mortimer-Lee, chief market economist at BNP Paribas, said in an interview with CNNMoney on Tuesday that he thinks the yield on the 10-Year Treasury — currently about 2.54% — will hit 3% by the end of the year.

“Tax reform is a good idea, but what wasn’t was such a big tax giveaway to business at a time when the U.S. is close to full employment,” Mortimer-Lee said. “The market and economy could wind up overheating.”

Related: Why the U.S. dollar isn’t so mighty anymore

With that in mind, Mortimer-Lee added that the Fed could be behind the curve on inflation, especially as Europe and Japan keep recovering. That will probably lead to more bond selling as investors look for better opportunities elsewhere.

“The global economy is firing on all cylinders,” Mortimer-Lee said. “Treasuries will feel the heat.”

And so will many Americans if the rates on mortgages, auto loans, credit cards and small business loans start to creep higher along with interest rates.