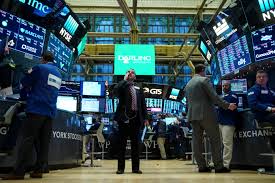 The year was typically full of surprises but market reactions defied conventional wisdom, leaving many a prognosticator flummoxed.

So, forecasting the twists and turns of 2017 took some serious skills. It’s no surprise that there were some awkward blunders. So as we look forward to what’s ahead next year, here’s a non-exhaustive list of some of the biggest winners and losers in markets during the past year.

Winner: Jonathan Golub
It was supposed to be a year in which Wall Street’s optimistic forecasts for the riskiest assets would be doomed if Donald Trump couldn’t follow through with a pro-growth agenda. Instead, concrete progress on tax cuts came only days before year-end — yet the S&P 500 Index managed to finish the year more than 175 points above the most bullish price target.

Count Jonathan Golub, who started the year as RBC’s chief equity strategist before moving over to Credit Suisse, as one of the few who got it right for the right reasons. His year-end 2017 price target of 2,500 for the S&P 500 Index was the highest among analysts surveyed by Bloomberg 12 months ago, but it wasn’t grounded in expectations surrounding fiscal policy. Golub said gains would come from global growth and stabilization in the energy industry, and at the end of the year that take seems pretty accurate.

And take note: Golub says any real boost from tax cuts will come in 2018.

Losers: Treasury Bears; Treasury Bulls, Too
The U.S. 10-year yield is poised to end 2017 with its narrowest trading range since 1965 — a reflection of suppressed macroeconomic volatility, predictable policy from major central banks, and an immense appetite for longer-dated debt.

Strategists who thought the post-election jump in yields was an overreaction and foresaw a fairly boring year for the 10-year Treasury note — like Wells Fargo Securities chief economist John Silvia, for instance — were vindicated.

Winner: The Bitcoin Bulls
It took guts for Wall Street bigwigs to back an unproven, volatile asset like bitcoin, and for some of its earliest proponents to avoid the temptation to cash out amid its astronomical surge. But those who had faith — including Tyler and Cameron Winkelvoss, Fundstrat’s Thomas Lee, Michael Novogratz, and ex-Legg Mason standout Bill Miller — look pretty smart.

The cryptocurrency also bolstered its credibility in 2017, even as its maturity and utility remain open questions. Two major exchanges, CME Group Inc. and Cboe Global Markets Inc., gave bitcoin bulls an early Christmas present with the start of futures contracts in December, a move that allowed for more institutional access to the asset class. Goldman Sachs, for its part, is said to be setting up a trading desk to make markets in digital coins. Bulls had the last laugh on those who spent the past few years insisting bitcoin was a joke.

Loser: America First
Financial markets failed to adhere to one of Donald Trump’s favorite campaign slogans in the first year of his presidency, with the U.S. dollar suffering its biggest loss since 2003.

Long greenback positions had been the most crowded trade late last year, according Bank of America’s survey of fund managers, with Goldman Sachs judging the currency to be the chief beneficiary from developed-nation populism.

And while the 20 percent advance in the S&P 500 Index this year was nothing to shake a stick at, it’s actually a middle-of-the-pack performance when comparing with benchmarks around the world, dwarfed by the gains in Asia Pacific and emerging-market indexes.

Loser: Trump Turmoil Trades
On the flip side, the lack of American exceptionalism in financial markets is linked to how little Trump has sought to disrupt this prevailing order.

Beginning-of-the-year speculation that the incoming administration’s trade policies would weaponize the dollar, kneecap global trade and cripple emerging-market and Asian assets haven’t been realized. Even with the overhang of Nafta renegotiations, the Mexican peso managed to appreciate more than 5 percent versus the greenback in 2017, while global trade volumes have swelled by 4.4 percent year-on-year through October.

The tumult fomented by the new U.S. commander-in-chief has, so far, been largely confined to politics and social media — not the economic or financial spheres.

Winner: Seth M. Golden
In late August, the New York Times chronicled the career evolution of this Target manager turned volatility-shorting hedge-funder. The piece proved not to be a contrarian indicator that marked the beginning of the end for the tranquil times of 2017. The VelocityShares Daily Inverse VIX Short-Term exchange traded fund booked more than half of its gains for the year after publication; the VIX products said to be shorted by Golden have continued to sink.

There’s no doubt the trade is a popular one, with speculative bets against VIX futures rising to a record in October. The Cboe Volatility Index would nonetheless go on to set fresh all-time lows in November.

Losers: Fed Fighters
It’d be tough to blame investors for harboring doubts that the Federal Reserve would actually carry out three interest rate hikes in 2017 — as the median dot indicated in December — on the heels of two years of broken pseudo-promises. But persistently easy financial conditions, above-trend growth and a robust global backdrop paved the way for exactly that.

This combination of a Fed follow-through and a tight range for the 10-year yield offers the simplest explanation for how the dominant story of the year in Treasuries — the relentless flattening of the curve– played out in practice.

Moreover, the new and rumored picks for Fed leadership under Trump have largely been viewed as consensus picks, with Governor Jerome Powell in particular representing relative continuity with outgoing Chair Janet Yellen. An Arthur Burns redux doesn’t appear to be on the docket.

Winner: Gold
On the surface, a year in which the Federal Reserve lifted its policy rate, equity volatility remained moribund, and event risk never really materialized would seem like kryptonite for bullion. Oh, and not to mention the ascendance of bitcoin, which attracted flows and challenged the barbarous relic’s role as an uncorrelated asset and store of value outside the traditional fiat currency system.

Turns out, someone forgot to tell gold: the shiny rock managed to post a 12.5 return on the year, very close to the consensus 13 percent gain strategists penciled in at the start of 2017.

Loser: Anyone Who Traded the News
“Stocks will be doomed if Trump and Congress don’t do X soon” became the most popular formula for market-related stories as the Republican Party’s legislative agenda got stuck in the mud for most of the year. Standstill in Congress would jeopardize the sharp gains achieved in the immediate aftermath of the U.S. election would be held, the thinking went.

The idea proved ill-founded in a Goldilocks environment of benign inflation and synchronized global growth. Bets that the reduction of the mortgage interest deduction in the U.S. tax overhaul would imperil high-flying homebuilder stocks also quickly soured. The SPDR S&P Homebuilders exchange-traded fund hit fresh highs after a brief pullback, with the National Association of Home Builders’ index of sentiment soaring to levels not seen since 1999 in December.