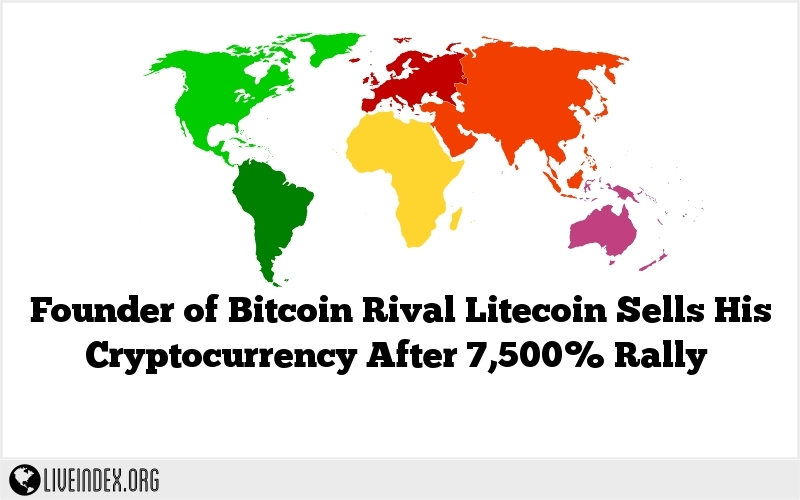 Founder of Bitcoin Rival Litecoin Sells His Cryptocurrency After 7,500% Rally

The creator of the world’s fifth-biggest cryptocurrency cashed in his profits during a 75-fold rally this year.

Charlie Lee, a San Francisco-based software engineer who founded litecoin in 2013, said in a reddit post that he sold and donated all of his holdings over the past few days. The disposal is aimed at preventing a “conflict of interest” when Lee makes comments on social media about the digital currency that could influence its price, he said.

“Litecoin has been very good for me financially, so I am well off enough that I no longer need to tie my financial success to litecoin’s success,” Lee said. “For the first time in 6+ years, I no longer own a single LTC” other than a few collector’s coins.

Read: Bloomberg Adds Ethereum, Litecoin and Ripple to Its Terminal

Lee declined to comment in the post on how many coins he sold or at what price, but noted that the amount was a small percentage of daily volume and “did not crash the market.”

Litecoin has climbed more than 9% percent in the past five days to $ 330.07, according to data from coinmarketcap.com. It slumped more than 7% on Wednesday, following most digital currencies lower after a string of bad news stories involving hacking and interventions by regulators. Lee insisted in his post that his sale wasn’t a sign that he has lost faith in the cryptocurrency.

“I will still spend all my time working on litecoin,” he said. “When litecoin succeeds, I will still be rewarded in lots of different ways, just not directly via ownership of coins.”

Read: What Is Litecoin, and Why Is It Beating Bitcoin This Year?

And how does it feel to take profits on a high from the crypto boom that has been described as the biggest financial bubble of all time? “Weird” but also “somehow refreshing,” Lee wrote.