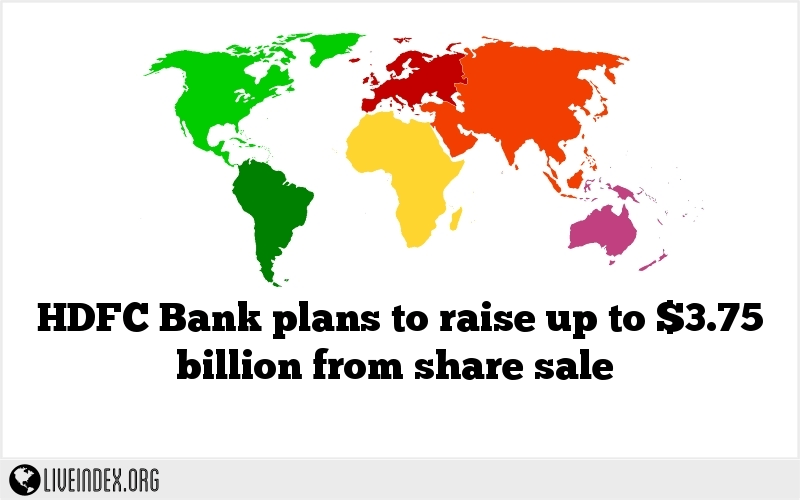 HDFC Bank plans to raise up to $3.75 billion from share sale

HDFC Bank Ltd (HDBK.NS), India’s second-biggest lender by assets, said on Wednesday it would raise up to 240 billion rupees ($ 3.75 billion) to fund growth by selling shares to investors, including a preferential issue to its parent HDFC Ltd (HDFC.NS).

HDFC Bank, the most valuable in the sector with a market capitalization of more than $ 76 billion, said in a statement its board had approved the fundraising plan on Wednesday. Shareholders will be asked to vote on the plan on Jan. 19, the lender added.

As part of the planned fundraising, HDFC Bank will issue up to 85 billion rupees worth of shares to mortgage lender HDFC Ltd on a preferential basis, while the remainder will be raised via modes including American Depositary Receipts and a share sale in India to institutional investors.

HDFC Bank has the lowest bad-loan ratio among India’s top banks and is an investor favorite with its consistent profit growth in a sector whose profitability has been burdened by the large amount of bad debt in their books.

As of end-September, HDFC Bank had a capital adequacy ratio of 15.1 percent against a regulatory requirement of 10.25 percent. HDFC Bank is one of the three in India designated by the central bank as “too big to fail”.

HDFC Bank shares gained as much as 1 percent, hitting a record high of 1,903.1 rupees. The stock has risen 56 percent this year, compared with a 28 percent gain in the Nifty 50 index .NSEI and a 41.5 percent rise in the banking sector index .

Reporting by Devidutta Tripathy in Mumbai and Samantha Kareen Nair in Bengaluru,; Editing by Amrutha Gayathri and Stephen Coates