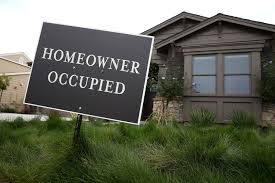 Almost half of Americans and Europeans have given up on ever owning their own home, according to a new study released Tuesday.

Dutch bank ING found that 45% of Americans and 56% of Germans and Britons believe they’ll never be able to afford their own home, even though a clear majority (60% or more) want to.

The survey reflects how a combination of rising home prices, stagnant wages, and the spread of what economists call ‘precarious’ employment—best typified by the flexible contracts of the ‘gig economy’—have combined to put home ownership beyond the reach of ordinary people.

Read: London’s House Prices Are Falling at Their Fastest Rate Since the Financial Crisis

According to online realtor Zillow, the median price for a single family home in the U.S. has risen by one third from the post-crisis low in 2012, while BLS data show that average hourly earnings have only risen 14% during that period. At $ 202,000 in September, the median family home costs nearly 7% more than at the peak of the pre-crisis boom.

But ownership is about more than just sticker prices. For most people, buying a home means a mortgage, and mortgages are harder to get (and generally more expensive) when you can’t prove a steady income. That will apply to more and more Americans in coming years: Emergent Research estimates the number of those working in the gig economy will rise from 3.9 million in 2016 to 9.2 million by 2021.

In Europe, things look slightly different. Extreme housing booms in countries such as Spain before the crisis mean that today’s price levels are still around 25% lower than in 2007. But a decade of cripplingly high unemployment, particularly among the younger generation, has many doubting their ability to make it into the ranks of homeowners.

Read: Here’s a Really Good Sign the Economy Is Rebounding

By contrast, house prices in Germany barely moved between 2000 and 2010, but have risen 40% since then. Collapsing returns on bonds and savings accounts have led Germans to buy rental properties in search of a steady income, and investors have been willing to push prices higher and higher while still getting a yield that compares favorably with traditional low-risk investments. Even today, no German federal government bond maturing before 2024 yields above 0%.

As ING points out, just because people are pessimistic doesn’t mean they’ve given up. Three in five Europeans—and 70% of the 18-34 age group—would still like to own their own home, not least because they see it as a sign of success, as well as a smart money move.