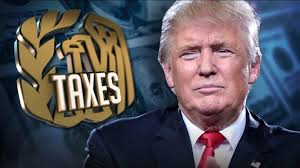 President Donald Trump repeatedly says his proposed tax cut would be the biggest in U.S. history, but it will not even come close to the record.

Trump would be on target if he were talking only about corporate taxes, but he has included other taxes in his boast.

The president and his fellow Republicans in Congress propose cutting the top corporate tax rate to 20% from 35%. If they succeed, it would be the largest American corporate tax cut since the modern corporate tax began more than a century ago.

As proposed by the Republicans, the corporate rate would fall 43%, compared with the second-largest such cut of 26% under Republican President Ronald Reagan in the 1980s.

But on individual taxes, Trump’s claim does not hold up, according to data on top personal income tax rates collected by the Tax Foundation, a Washington think tank.

Some Republicans in Congress are backing away from cutting the top individual tax rate, now 39.6%. But even if they did cut it as low as Trump wants, to 35%, the president would not even come close to winning bragging rights.

But the huge tax cuts of President Warren Harding and President Calvin Coolidge, both Republicans, take the prize. In 1922, the top tax rate was 73%. By 1925, it was only 25%, almost a 66% decline. Coolidge alone was responsible for a 57% cut in taxes.

Still, there are other ways to measure the size of a tax cut besides the rates themselves. One approach would measure how much tax revenue the federal government does not get and taxpayers get to keep. That is the “cost” of a tax cut.

But that number is disputed between those who favor tax cuts and those who do not. The Trump administration argues its tax cuts will ignite the economy and tax revenue will increase, not decrease. That way, the cuts “pay for themselves,” they say.

The Committee for a Responsible Federal Budget, a bipartisan Washington think tank, estimated the Trump tax cut could be the fourth-largest as a percentage of gross domestic product, or GDP, a measure of national economic output.

The think tank favors that measure because it eliminates the effects of inflation, economic growth and the size of total federal revenue. By that measure, it agreed with a number of economists who said the Reagan cuts were the largest in history, even larger than Coolidge’s.

As for bragging rights to the all-time biggest tax hike, the winner is Democratic President Woodrow Wilson. During World War One, he increased the top individual rate to 77% from 7% and the corporate rate to 12% from 1%.