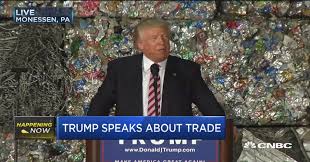 As President Trump heads to Vietnam for the Asia-Pacific Economic Cooperation summit, the full force and ramifications of his trade policies will be clear to see.
Firstly, he will come face to face with the leaders from all 11 other countries that were part of the Trans-Pacific Partnership, the trade pact that fell apart after Trump withdrew the U.S. from it shortly after he was inaugurated.Those other countries, led by Japan and New Zealand, have been trying to salvage what they can and cobble together a new deal without America that may come to fruition early next year.

Canada & Mexico will also be at APEC. Both governments are bravely trying to re-negotiate the NAFTA treaty with the U.S. and salvage what they can — even as Trump seems hell-bent on leaving NAFTA if he can’t get a better deal.

Then there’s China — a country that has borne the brunt of Trump’s tough talk and threats. There has been a lot of noise from Washington about currency manipulation and closed markets, but no action yet. Meanwhile, the Chinese are taking advantage of the TPP’s collapse by pushing their own deal for Asia — the Regional Comprehensive Economic Partnership.

President Trump promoted reforms of U.S. trade policies a cornerstone of his campaign and is following through in his administration. But we may soon see just how much progress he’s made — or damage that’s been done with America’s economic allies.

Powell is expected to maintain the Fed’s policies of gradually raising interest rates. He’s also a proponent of Dodd-Frank, the sweeping banking regulation instituted after the financial crisis.

The decision means that Trump elected not to renominate current Chair Janet Yellen to another 4-year term, breaking the precedent of the last 40 years. Yellen is handing over the keys to Powell with the U.S. economy in much better shape since she joined the Board of Governors in 2010.

Yellen and Powell also met with the rest of the Fed’s monetary policy committee on Wednesday and decided not to raise rates, though a December rate hike is likely.

U.S. investigators are scrambling to get to the bottom of Tuesday’s terror attack in New York City. Authorities say a 29-year-old man driving a rented pickup truck plowed into a crowd of bicyclists and pedestrians and crashed the truck into a school bus, killing eight people.

The Manhattan neighborhood where the devastation took place has transformed in the past two decades — particularly since the September 11 attacks.

Also of note: Sayfullo Saipov, the suspected attacker, was a driver for both Uber and Lyft.

Facebook told U.S. lawmakers as many as 126 million users may have been exposed to content from a Russia-linked troll farm trying to meddle in the U.S. election.

Lawyers from Facebook, Google and Twitter faced tough questions from politicians at several hearings. Some wanted Congress to push harder though, and others wondered why the CEOs weren’t asked to testify.

But Mark Zuckerberg addressed the topic in Facebook’s earnings call, saying that it plans to invest heavily in security — even if it comes at the expense of profits.

Will Frank Underwood return to “House of Cards?”

Netflix suspended production of the sixth (and last) season of the political drama following sexual assault accusations against star Kevin Spacey. He is now seeking treatment, according to his publicist.

So what now for Netflix? “House of Cards” helped make it a powerhouse, but Netflix also has “Stranger Things” and numerous other hits. Its subscriber base has tripled since “House of Cards” debuted. And its market value is $ 85 billion — more than Fox, CBS and Viacom combined.

Tax bill revealed! Your 401(k) plan is safe, but pricey home buys may be hurt

Stagnant wages are a global problem, from the U.S. and Germany to Australia

GE has spent a decade dismantling its empire. Now it’s shrinking even more

Get ready for the iPhone X: Apple will officially release its buzzy new phone on Friday. Here are some first impressions from a CNN Tech reporter.

Trump leaves for Asia: President Trump embarks on an 11-day trip to Asia on Friday. He’s bringing a business delegation of top executives to China, and will attend the APEC summit in Vietnam.