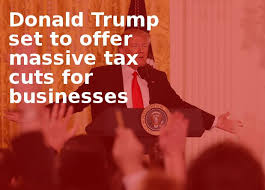 Is now really the time for massive tax cuts?

New numbers released Friday show that the U.S. has grown at 3% for back-to-back quarters for the first time in three years. Unemployment is sitting at just 4.2%, the lowest in 16 years. And consumer sentiment rose in October to levels unseen since early 2004.
Despite the obvious strength in the economy, Trump recently promised on Twitter the “biggest TAX CUT” ever, adding “we need it!”

Trump says he wants to push through both tax reform, which would modernize the outdated tax code, and to provide tax cuts to individuals and businesses.

Given how healthy the economy is, some economists are mystified over Trump’s urgent push for tax cuts that are likely to be paid for by adding to America’s mountain of debt.

“No other president in modern economic history has tried to do this,” said Chris Rupkey, chief financial economist at MUFG Union Bank. “It just seems completely unnecessary. With unemployment at 4.2%, why on earth would we try to stimulate the economy?”

Normally, presidents ask Congress for deficit-financed tax cuts when the economy is weak. That’s what President Obama did in 2009 during the Great Recession, and President George W. Bush did the same after the 2001 downturn.

“This is kind of an odd time to get fiscal stimulus. It’s not like we’re in a recession, or coming out of one,” said Gus Faucher, chief economist at PNC.

Here’s the problem: There will be another recession, eventually. And spending heavily to slash the corporate tax rate to 20% from 35% today could leave Congress with fewer options to tackle the next downturn. The current economic expansion is already the second-longest ever.

The Tax Policy Center estimates that Trump’s tax overhaul would slash federal revenue by $ 2.4 trillion over 10 years, and by $ 3.2 trillion over the second decade. And the national debt is already 77% of GDP, and slated to keep growing.

“The risk is we don’t have the money for a rainy day. It’s borderline irresponsible,” said Rupkey.

It’s true that the U.S. economy is not perfect. Businesses remain reluctant to spend, and Americans aren’t getting the raises they deserve. Wage growth has been sluggish, although that improved in September.

It’s also true that tax reform is an admirable goal, no matter how fast the economy is growing. Tax reform, which is aimed at making the sprawling and outdated system more efficient, is different and much less costly than tax cuts.

“Tax reform that is paid for is much better for the economy than a plan that adds to the debt,” Maya MacGuineas, president of the nonpartisan Committee for Responsible Federal Budget, wrote recently.

Some experts believe that efforts to reform the tax code will fail once details of the bill are finally unveiled on November 1, leaving the GOP to push simple tax cuts instead.

Given that the U.S. economy is “at full employment,” Gapen believes that tax cuts will provide a “temporary boost” to GDP of just 0.5 percentage points. That would leave 2018 growth near 2.8%.

The White House was asked on Friday by reporters about the need for tax cuts given solid GDP growth.

Kevin Hassett, chair of Trump’s Council of Economic Advisers, argued that the U.S. economy has accelerated because businesses are excited about tax and regulatory reform.

Hassett also predicted that lowering the corporate tax rate and allowing businesses to immediately write off investments could increase GDP by 3% to 5%, as well as boost wages.

Without tax cuts and tax relief, the U.S. will be stuck with “depressed wage growth,” the White House said in a statement on Friday.

Rupkey concedes that tax reform could boost wages, but he’s skeptical that wage growth will accelerate by a meaningful amount.

Some economists fear that stimulus at this point in the economic cycle could be too much of a good thing.

“The worry is that by adding fuel to what’s already, believe it or not, a pretty fiery economy in the U.S., you risk driving inflation and overheating growth,” said Guy LeBas, chief fixed income strategist at Janney Capital.

Such an outcome could spur the Federal Reserve to raise interest rates so rapidly that it derails the stock market and burdens businesses and consumers with higher borrowing costs.

“Deficit-financed tax cuts are the wrong way to go at this point,” said Faucher.