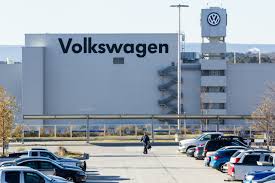 Volkswagen issued its third-quarter results on Thursday, showing a solid increase in earnings. Demand is looking good, production is up, and cost-cutting seems to be working as intended.

However, the two-year-old “Dieselgate” scandal continued to be a factor, with profits for the quarter being heavily impacted by the €2.6 billion ($ 3 billion) costs of fixing diesel engines in the U.S., in particular. The engines need to be fixed to make emission readings more accurate—the inaccuracy was deliberate, as car-makers including Volkswagen vlkay sought to undermine emissions standards.

Volkswagen’s Q3 sales revenues were €55 billion, up 5.8% from the €52 billion harvested in the same quarter last year. Group earnings before interest and taxes—and not counting those special items—were up 15% to €4.3 billion, beating analyst expectations.

However, the group’s pre-tax quarterly operating profits, at €1.6 billion, were down more than 52% year-on-year. This was because of the Dieselgate costs, of which Volkswagen warned a month ago.

“Continuous monitoring of the [buyback and retrofit] program has shown that the scheme is more comprehensive and technically more challenging than expected; this also entails an extension to the program period,” the company said in its quarterly report.

However, more-or-less knowing what to expect on that front, investors were happy with what they saw. Deliveries for the quarter were up 6.3% year-on-year, and production was up 9.6%—growth that was largely attributable to Volkswagen’s facilities outside Germany.

Volkswagen’s share price reacted accordingly, up 1.75% at the time of writing on Friday. Its positive results, along with those of chemical firm Linde, helped take the DAX German stock index up 93 points.

It will be interesting to see what happens in Germany’s post-election coalition talks. There is only one potentially viable coalition that could have a majority: Angela Merkel’s conservative Christian Democrats, the liberal Free Democrats, and the Greens. The Greens want to ban diesel cars, and even Merkel criticized Germany’s car industry during the campaign, making the companies somewhat nervous now.

“During the election campaign, the industry and VW were treated frivolously,” Müller said Wednesday. “We want to cooperate more closely with politicians in the area of mobility concepts. I’d wish that a new government in Berlin recognizes how systemically important our industry is.”