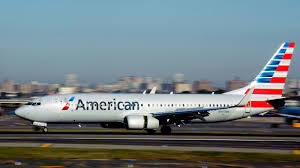 The NAACP on Tuesday warned African American travelers against flying on American Airlines, citing incidents of alleged racial bias that made a potential trip “unsafe.”

“The NAACP for several months now has been monitoring a pattern of disturbing incidents reported by African-American passengers, specific to American Airlines,” said Derrick Johnson, President and CEO of the NAACP in a strongly worded statement Wednesday.

Still, shares of American Airlines aal appeared unaffected by the news, sliding about 2% by late trading Wednesday. The sell off has largely been thanks to Alaska Air Group earnings that missed expectations in the third quarter, fanning worries that air travel in general was weaker than previously though during the period. Alaska Air Group lost about 12% on the news, while the S&P 500 Airlines Index fell by about 3%.

Perhaps its comes as a surprise considering a potential boycott from the U.S.’s second-largest ethnic group, or perhaps it comes as no surprise to those who followed the April United Airlines saga in which the giant became known for dragging a bloodied passenger off an overbooked plane. Shares of United barely wavered on the news. One month later, it breached an all-time high. The reason?

“Even if consumers wanted to boycott those airlines, their hands are tied,” said Jonah Berger, a marketing professor at the the University of Pennsylvania’s Wharton School Wednesday.

Though the airlines industry has become one of America’s most beloved customer service punching bags, it’s also highly resilient to such boycotts due to heavy consolidation over the past decade. American is among four airlines that command roughly 70% of the U.S. market — giving consumers little choice over who flies them where.

Perhaps coincidentally, African Americans also make up a disproportionately small percentage of fliers: 8% in 2015, according to research from Ipsos Public Affairs and Airlines for America, which surveyed over 3,000 Americans over the age of 18. African-Americans make up 13.3% of the general population, according to Census Bureau data. Similar data from Gallup in 2015 also found that non-white fliers also tend to travel less. While the average white traveler took about 2.5 air trips a year, non-whites took less than half that figure.

Still, while its unclear what portion of American Airlines customers are black, its more likely than not that the company will seek an amicable conclusion to its back-and-forth with the NAACP.

Even if it is at 8%, “[African Americans] make up a significant portion of passengers,” said Berger. “It’s a group of passengers that American would not want to lose… American doesn’t want to stoke the fire any further. They will try to reach a resolution.”

But the problem still remains for airlines in general facing discrimination: How do you prove beyond doubt that racial bias had, or didn’t have a hand in a passenger’s treatment? The NAACP after all listed four pieces of alleged racial bias.

Berger says a good place to start is data.

“With police we can look at stop and frisk data,” he said. “The challenge is does anyone keep data on these incidents?”

Meanwhile, racial diversity figures in the airline industry are also mixed. While about 13.7% of flight attendants are African-American, they make up only 3% of aircraft pilots and flight engineers, according to the Bureau of Labor Statistics 2016 survey.

In total, roughly 7.3% of airplane workers (pilots, engineers, and attendants) in 2016 were black, according to Bureau of Labor Statistics data. That’s less diverse than Apple, where 9% of employees that African American in 2015.