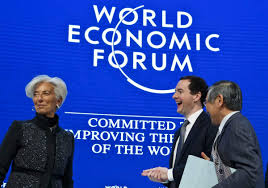 International Monetary Fund members gave lukewarm endorsement to a strengthening global economy but conceded they were not out of the woods as they grappled with subdued inflation, low potential growth and an uneven recovery that clouded the outlook.

With central banks left with less firepower and some seeking to exit crisis-mode stimulus measures, the IMF members also renewed calls for fiscal policy and structural reforms to carry more of the burden in solidifying the recovery, now that the worst days of the economic storm had passed.

“Structural reforms that were difficult to do in hard times would be much easier in better times because the outlook is stronger,” IMF Managing Director Christine Lagarde told reporters on Saturday.

“It’s when the sun is shining that you need to fix the roof. That message was received 100 percent (by the policymakers).”

A communique from the IMF’s steering body, the International Monetary and Financial Committee (IMFC), said a global economic upswing, driven by a pickup in investment, trade and factory output, was brightening the outlook.

But it warned policymakers against complacency, saying that the recovery was “not yet complete” with inflation below target and potential growth weak in many countries.

Financial leaders attending the meeting also warned that while economies had improved in many countries there were people who had been left behind.

The optimism on global growth was overshadowed by tensions on trade, which was in full show in contentious talks to renew the North American Free Trade Agreement (NAFTA) held during the IMF’s autumn meetings.

The communique made no mention of trade, though Lagarde sought to offer a bright note by saying it was “perfectly legitimate” to renew long-standing trade agreements to respond to a changing world.

“Trade is a very powerful engine of growth, innovation, competition and productivity … Hopefully if it is well done, it can be a win-win for all countries in those negotiations,” she said, when asked about the NAFTA talks.

The communique said member countries agreed to work together to reduce “excessive global imbalances,” and to look more carefully at potential side-effects that prolonged low interest rates could have on asset prices and economic activity.

Policymakers also had less to cheer on inflation and wages, which remain weak despite a strengthening recovery that prompted the IMF to upgrade its global growth forecast.

Bank of Japan Governor Haruhiko Kuroda said that while subdued price and wage growth has become a common phenomenon in advanced economies, it was ”only a question of time“ for them to accelerate as the economy gathers momentum.”

“The bottom line in terms of policy is that we are confident that as the conditions will continue to improve, the inflation rate will gradually converge in a self-sustained manner,” he said.

“But together with our confidence, we should also be patient because it’s going to take time.”