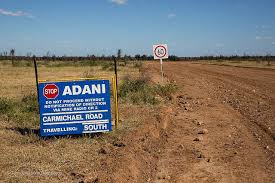 Thousands protest across Australia against giant Adani coal mine

SYDNEY (Reuters) – Large protests were held across Australia on Saturday against Indian mining giant Adani Enterprises’ proposed Carmichael coal mine, which would be the country’s largest coal mine but has been delayed for years over environmental and financing issues.

Environment groups say the mine in Queensland state would contribute to global warming and damage the Great Barrier Reef.

“I think there’s a very real national concern that goes beyond Queensland about the idea of giving this mine a billion-dollar taxpayer-funded loan,” she said.

The national rallies come as new polling shows more than half of Australians oppose the mine, reported local media.

Analysts have raised doubts about whether Adani can fund the mine, at an initial cost of $ 4 billion, given a global backlash to investment in fossil fuels.

Adani says the project would pay billions of dollars in royalties and taxes, create jobs and export coal to India help bring electricity to rural regions.

Adani has been counting on a A$ 900 million ($ 704 million) loan from the Northern Australian Infrastructure Facility (NAIF) for a rail link to the proposed mine.

The company’s chief executive officer Jeyakumar Janakaraj, however, has said Adani may not have to borrow from NAIF. “If the commercial banks take off all the debt then we will not have any need for NAIF as there will be no gap.”

The Australian Conservation Fund president Geoff Cousins, one of the country’s top businessmen, said it was unlikely Adani could proceed without the NAIF loan.

“They’ve tried hard to secure commercial funding, but no bank will touch them,” he said.

“Stop Adani is an issues-based campaign, and the rest of the world sees the madness of building one of the world’s largest coal mines particularly when Australia has signed the Paris Agreement (on climate change).”