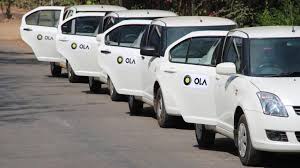 Indian ride-hailing firm Ola is in talks with investors to raise around $ 2 billion, two sources said on Tuesday, in a potential boost to its battle with U.S. rival Uber [UBER.UL].

Ola is in discussions with existing investor SoftBank (9984.T) and China’s Tencent Holdings (0700.HK) along with other investors, said the sources, who asked not to be named as the talks are private.

The talks are part of the same fundraising round that Ola began earlier this year, one of the sources said, adding that the whole financing round, made up of multiple tranches, is likely to close within a few weeks.

On Monday, Bloomberg reported that Ola had already secured $ 2 billion in new funding from a group of investors.

Fresh money would be a boost for Ola, which has been locked in a fierce battle with Uber for a bigger piece of India’s $ 12 billion ride-hailing market.

San Francisco-based Uber has been hit by a series of scandals that culminated in several high level departures, including that of founder and former CEO Travis Kalanick.

In another setback, London’s transport authority deemed Uber unfit to run a taxi service and decided last month not to renew its licence. This came days after Uber began a review of its Asia operations following a probe into whether it violated U.S. anti-bribery laws.

Analysts say that with Uber’s new CEO Dara Khosrowshahi focussed on putting the company on an even keel, Ola has an opportunity to extend its lead in India.

“Uber will have to go back and pitch for more funds to fight Ola,” Dhananjay Sharma, who tracks the ride-hailing sector for research firm RedSeer Consulting, said.

“India’s not a place they can easily neglect,” said Sharma, noting the country is a vital overseas market for Uber following its exit from Russia and China.

The new funds will be invested in growing its car leasing unit, which will ensure an increase in the supply of drivers, and in providing electric cars in more cities, the second source said. It will also invest in technology like its in-car Play platform that allows riders to choose music or watch videos.