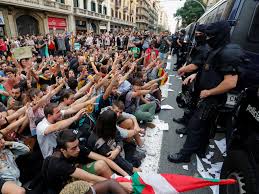 Hostage to Catalonia? No Way, Says the EU

The would-be secessionists in the Spanish region of Catalonia are about to get a reality check.

Carles Puigdemont, the region’s prime minister, wants international mediation to help deliver his promise of an independent Catalan state. He senses that his negotiating hand with the central government in Madrid will be strengthened by the international moral outrage at viral video images and TV coverage of Spanish government police beating up his supporters as they tried to take part in Sunday’s unsanctioned referendum.

Trouble is, neither the EU Commission, nor the EU’s member states, nor the international businesses that have been happy to make their Spanish home in and around Barcelona, have any intention of playing his game.

In a statement Monday, the EU Commission warned that Sunday’s vote was an internal matter for Spain, and that it “was not legal” under the Spanish constitution. Even if a legal referendum succeeded, it added, secession from the Kingdom of Spain would entail leaving the European Union. And, for the avoidance of any doubt, it added: “We trust the leadership of Prime Minister Mariano Rajoy to manage this difficult process in full respect of the Spanish Constitution and of the fundamental rights of citizens enshrined therein.”

It avoided mentioning Puigdemont or the Catalan government at all. Nor was there any support from French President Emmanuel Macron (who expressed his support for Spain’s constitutional unity in a phone call to Rajoy) or German Chancellor Angela Merkel or Italian PM Paolo Gentiloni, both of whom were deafeningly silent.

There was no succor from business either. Labor unions at Volkswagen unit SEAT, the biggest private-sector employer in the region, said they wouldn’t join in the strike that two regional labor organizations had called for Tuesday. Noises coming out of other businesses also suggested that the call to action will be honored more in the breach than in the observance.

None of this should be really surprising: the vote was indeed illegal, and only supporters of independence came out to take part. Only 2.26 million out of the 5.3 million electorate turned out to vote (though the Catalan government claims that some votes were taken when police confiscated ballot boxes). As Holger Schmieding of Berlin-based Berenberg Bank argues, that’s in line with opinion polls from earlier this year indicating a steady degree of support for full-blown independence of around 40%. Moreover, as the website EUObserver points out, there was no electoral roll and no electoral commission.

And in truth, the forces of the status quo haven’t even reached for their most powerful weapon yet. The other, still unspoken but stark reality of independence is that banks in Catalonia would immediately lose their right to funding from the European Central Bank. No more ECB funding means no more euros in the ATMs on Las Ramblas, and a rather uncomfortable call with Mario Draghi asking for Catalonia’s share of nearly 400 billion euros that Spain’s banking system currently refinances through Frankfurt. Shares in Catalonia-based banks Banco Sabadell (bndsy) and Caixabank both fell by more than 4% on the day in Madrid.

In short, it’s a one-sided contest that can only end one way. All that any further macho posturing from the two sides can influence is the degree of bitterness with which Catalonia and the rest of Spain manage their business in future.