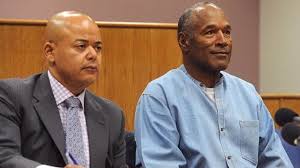 What Is O.J. Simpson’s Financial Future Now That He’s a Free Man?

The robbery capped off a decade-long descent into bizarre behavior after Simpson was famously acquitted in 1995 for the murder of his wife Nicole Brown and her friend Ron Goldman in what became known as “the trial of the century.”

Simpson, once considered an American hero, is now a much-reduced figure both in the public eye, and financially. Back in 1994 when he was at the pinnacle of his career, Simpson was worth an estimated $ 11 million, according to CNBC. But Simpson’s financial situation has since become a labyrinthine, to say the least: he’s simultaneously collecting a healthy annual income from various pensions, and saddled with an insurmountable debt load that will likely narrow his horizons for the remainder of his life.

Though Simpson was acquitted of criminal murder charges, a 1997 civil case hit Simpson with a total of $ 33.5 million in punitive damages. When the judgment was handed down, a New York Times reporter observed that “Mr. Simpson does not now have $ 33.5 million and likely never will.” That remark has proven prescient, and even after forfeiting many personal belongings, Simpson has reportedly paid down very little of the judgment – less than 1% as of 2014, according to Ron Goldman’s sister.

That has left the multi-million-dollar debt to swell over the years as interest accrued. In 2014, when Ron Goldman’s mother offered a portion of the settlement debt at auction, its face value had ballooned from $ 9 million to $ 24.7 million. By one estimate, Simpson’s total civil debt has reached $ 52 million, and Goldman family attorney David Cook recently told Fox News that he will remain relentless in hounding Simpson for payment.

But the massive debt might not entirely crimp Simpson’s lifestyle now that he’s free. First and foremost, he will receive as much as $ 300,000 annually in a pension from the NFL, as well as a smaller pension from the Screen Actors Guild. Cook admits that those pension funds are protected from being garnished to pay the civil judgment, just as most retirement funds are protected from creditors. According to one estimate, the total value of Simpson’s protected assets could be as high as $ 3 million.

It’s unclear whether Simpson will be able to generate additional income now that he’s free, and what might happen to it. There seems little chance he will ever work again as a pitchman or actor. But after his 1995 acquittal, Simpson did move to cash in on his gruesome notoriety with personal appearances and, later, a book entitled If I Did It.

Simpson appears to have set up a shell company to protect earnings from the book, but in 2007, the Goldman family successfully sued for rights to the book and any revenues. They would almost certainly do the same if Simpson were to attempt to work again.

So he might just have to figure out how to live comfortably on a mere $ 300,000 a year. For the Goldmans and others, that might not sound like justice — but it’s also a far cry from the life that Simpson could have lived. To take just one data point for comparison, Fox recently offered quarterback Jay Cutler — nowhere near as well-known or beloved as Simpson in his heyday — $ 450,000 a year to work as a commentator.