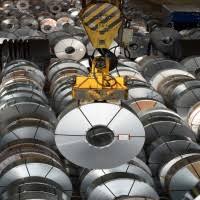 U.S. to continue probe into stainless flanges from China, India

The U.S. International Trade Commission said on Friday it voted to continue investigations into possible dumping and subsidization of stainless steel flanges from China and India.

The Department of Commerce announced on Sept. 6 preliminary phase antidumping and countervailing duty investigations into the products.

In 2016 imports of stainless steel flanges from China and India were valued at an estimated $ 16.3 million and $ 32.1 million, respectively, the department said.

They alleged dumping margins, or the discount to fair value, on products from China of 99.23 percent to 257.11 percent and from India of 78.49 percent to 145.25 percent. They also estimated that products from both countries were subsidized at undetermined rates, the Commerce Department said.