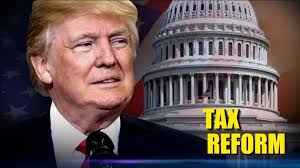 Slashing corporate taxes is the way to go for America. But voters and investors, don’t be fooled: Even if tax reform recharges growth as President Donald Trump and the Republican Party are advertising, it won’t come close to thwarting America’s looming federal budget crisis.

“It’s a non-starter to think we can grow ourselves out of this budget mess,” says Veronique de Rugy, an economist at the conservative Mercatus Center at George Mason University.

Relying on tax reform to fuel economic growth—spending be damned—is the objective of the new federal budget deal forged in the Senate Budget Committee by Sens. Bob Corker (R-Tenn) and Pat Toomey (R-Pa). The federal budget proposal calls for $ 1.5 trillion in “tax reductions” over the next decade. It’s important to understand precisely what that number means. In effect, the Republicans’ proposed budget makes room for the Treasury to collect $ 1.5 trillion less in revenue than the amounts forecast under the Congressional Budget Office’s “baseline,” the projections based on current trends and current law.

The Republicans, however, could champion cutting taxes by a lot more than $ 1.5 trillion. That’s because their leaders are predicting that tax reductions, especially chopping corporate tax rates, will unshackle economic growth and create a windfall in tax receipts. “The $ 1.5 trillion is a net number,” says Brian Riedl, a budget expert at the conservative Manhattan Institute. “The Republicans could go for $ 3 trillion in tax cuts and predict that the cuts generate added growth that creates $ 1.5 trillion in extra revenues. The net loss in revenues is still $ 1.5 trillion, but the cut is a lot deeper.”

Of course, the paramount issue is how much, if any, tax reductions will lift today’s tepid GDP expansion of around 2%. Congress’s Joint Committee on Taxation and the Congressional Budget Office, will use “dynamic scoring” to forecast whether, and how much, the GDP plan quickens growth. But the Budget Committee isn’t bound by either body. It can run its own forecasts that, for example, foresee sustained improvements far greater than either the JCT or the CBO anticipates.

In general, advocates of tax reform make two claims: First, that deep tax cuts can generate as much a 1% rise in GDP; and second, that one percentage point of extra growth produces $ 3 trillion in extra tax revenues over the following decade. Senate Budget Committee member Ron Johnson (R-Wis) broadly endorses that formula. The conservative-leaning Tax Foundation says those forecasts are plausible, but adds an important proviso. “The tax plan has to be ideal to get a number that big,” says Kyle Pomerleau, its director of federal projects. “And that big driver would be extremely large reductions in corporate rates.”

It’s the corporate tax cuts that really matter for growth. And right now, it’s impossible to predict how big or well-targeted those reductions will be, if they’re even enacted. Still, it’s highly instructive to contemplate what America’s debt and deficit picture would look like a decade hence, even using the highly optimistic projections advanced by Senate Republicans.
How big could the federal budget deficit get?

To measure how much tax reform would alter the fiscal picture, we’ll compare the scenario 10 years from now with the CBO’s outlook assuming that revenues and outlays remain on their current trajectory. However, first we’ll make an important adjustment to the CBO baseline. Here’s why: Since the CBO is bound to assume that current federal budget rules remain in force, it forecasts that discretionary spending will fall steeply as a share of national income over the next decade. That’s because the spending caps enacted under the Budget Control Act of 2011, known as “sequestration,” would in theory severely restrain both defense and non-defense discretionary outlays. That won’t happen, because Trump is already advocating big increases in defense and infrastructure spending, and whenever the Republicans break the caps to raise funding for defense, members of the Democratic Party secure an equal rise for their favorite programs, from education to public housing.

So let’s make the much more reasonable forecast that discretionary outlays rise with GDP. Even with that adjustment, “The CBO’s forecasts are extremely rosy,” says Riedl. “They assume no wars, no recessions, and interest rates that remain near historic lows for years to come.”

After raising the trajectory for discretionary spending, here’s what we could expect in 2027, if nothing much changes. The deficit for that year would stand at $ 1.7 trillion, triple today’s figure, a gigantic 6.1% of national income. The total federal debt would balloon from today’s $ 14.7 trillion to over $ 27 trillion, rising from 77% of GDP to almost 100%. Unless the U.S. changes course, in a decade, Washington will be spending 34% more than it’s taking in, and the gap only expands from there.

Do deep, theoretically growth-enhancing reductions in taxes improve or worsen that picture?

To decide, let’s assess two possible outcomes. We’ll put aside the possibility that Congress enacts, say, $ 3 trillion in cuts. In that case, anything less than 3% growth would swell debt and deficits beyond the already dire predictions. That course would be reckless, though it isn’t impossible.

The first of our more plausible outcomes is about as good as it could possibly get. Say that Congress delivers $ 1.5 trillion in tax cuts, meaning total revenues fall short of the CBO’s projections by precisely that amount. Let’s also assume that lower rates ignite animal spirits that drive annual GDP growth from the CBO’s current projection of just under 2% to 3%. If the optimists are correct, that one extra point should generate $ 3 trillion in extra revenues.

In that scenario, tax cuts more than pay for themselves. From 2017 to 2027, total revenues would rise from $ 62.2 trillion to $ 65.2 trillion. By 2027, the projected deficit would drop from $ 1.463 trillion to $ 1.42 trillion. Debt would be $ 24 trillion, around $ 1.5 trillion less than under the baseline. Although the improvements in total dollar debt and deficits are modest, what’s really important is the bump to GDP. National income would end the decade at $ 31 trillion, 11% higher than the current projection of $ 28 trillion.

The second projection is considerably less optimistic, and probably far more prudent. It assumes that growth jumps not to 3% but to 2.5% (still about one fourth than the CBO’s current projections). In that case, the $ 1.5 trillion in cuts would simply pay for themselves: Total revenues would expand by $ 1.5 trillion, driven by lower rates, fully offsetting the lower receipts to the Treasury. So the final result looks just like our adjusted base case, at least regarding the dollar size of debts and deficits. The deficit would be $ 1.7 trillion and the debt would touch 100% of GDP.

Still, both of our scenarios are an improvement on the baseline, for a basic reason: GDP would be a lot higher under both. National income would be 11% greater at a 3% growth rate, and around 6% bigger at 2.5%. That means folks would see fatter paychecks, corporate earnings would thrive, and a federal budget crisis might well be forestalled, because a more prosperous America could afford the surging deficit and debts now in the cards—at least for a while.

Those gains, however, would be just a temporary fix. That becomes obvious when you examine the CBO’s dire outlook for the following decade, spanning 2028 to 2038. Over that period, America’s debt is projected to rise to over $ 50 trillion, if discretionary spending growth tracks GDP—thanks to the steady rise in projected spending on Medicare, Medicaid and Social Security. So let’s assume the 3% growth trajectory keeps running. Adjusted for inflation, the faster expansion would add well over $ 3 trillion in extra revenue adjusted for inflation, and cut interest payments more than $ 500 million. Recall that debt in 2027 under 3% growth is $ 24 trillion. Even if we grow 50% faster than we are now, our debt would swell from $ 24 trillion to $ 46 trillion (that’s today’s estimate of $ 50 trillion minus extra revenue and reduced interest of $ 4 trillion).

The dire conclusion: Even with significantly higher GDP, debt would total over 100% of GDP. The U.S. would be spending around $ 10.4 trillion a year and collecting $ 7.7 trillion—spending 35% more than we take in.
Tax reform: an expensive tonic

Tax reform is indeed a tonic. The impetus would come from substantially lower corporate rates that would make the economy far more competitive and drive the ingredient that’s sorely missing, a surge in capital spending. The key number is the top corporate rate.

But tax reform doesn’t tame the real threat, the unbridled rise in the cost of retirement and medical benefits. “No level of tax reform can compensate for the tremendous growth in government spending because of entitlements and the transfer of wealth from the very young to the very old,” says de Rugy. She argues that tax reform is a good idea, because “everything will be easier if the economy is growing.” She says the extra growth could be the “sugar” that makes the medicine of eventual entitlement reform “easier to swallow.”

So lowering taxes isn’t so much an end in itself as a strategy for selling what really matters, a sweeping overhaul of entitlements. Tomorrow’s choice could well be between that course and a European-style value-added tax that, though it looks good in theory, could enormously swell the size of government. While tax reform is important, it’s that choice that will determine America’s true competitiveness in the decades to come.