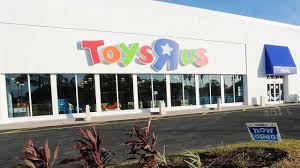 Only outranked by a 2002 Kmart and a 1990 Federated Department Stores filings, Toys ‘R’ Us now lays claim to being the third largest retailer that has filed for Chapter 11 bankruptcy, according to Bankruptcydata.com on Tuesday. The site ranks the bankruptcy size by assets, and looks back as far as Chapter 11 as we know it has existed: since 1978.

That comes after Toys ‘R’ Us, once dubbed a “category killer,” filed for Chapter 11 bankruptcy protection in a Richmond, Va. court Monday. The retailer was saddled in debt, some $ 4.9 billion, left from a 2005 leveraged buyout for about $ 6.6 billion by private equity giants Kohlberg Kravis Roberts and Bain Capital, as well as real estate trust Vornado.

Meanwhile, its sales have failed to keep up with its debt load, with investors blaming its poor performance on its weak online push. While the company posted $ 11.3 billion in sales in 2000, that figure was at just $ 11.5 billion by 2016.