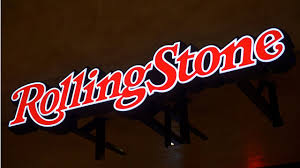 Rolling Stone Magazine Is Officially Up For Sale

Rolling Stone, arguably the most influential music magazine on the planet for the last 50 years, is up for sale.

Like much of the rest of the print media business, the magazine that made household names of Hunter S. Thompson, Tom Wolfe, and P.J. O’Rourke has struggled to adapt to the online environment. The magazine’s owner, Wenner Media, said in a statement that it was exploring strategic options for the title, having already sold two a 49% stake in Rollin Stone to BandLab Technologies, a Singapore-based music technology company. In recent months, Wenner has also sold Men’s Journal and Us Weekly, to American Media, the publisher of the National Enquirer, in a gradual exit from the print media business.

For decades, Rolling Stone almost single-handedly defined who was cool and who was important in the music world, its cover photos of stars like The Doors’ Jim Morrison, ex-Beatle John Lennon or Lady Gaga routinely morphing into the iconic portraits of their age. (It created a storm of criticism when it gave the same treatment to Dzhokhar Tsarnaev, the Boston Marathon bomber.) Its political and social commentary has also been potent and memorable. In the wake of the financial crisis, it was Rolling Stone’s Matt Taibi who coined the metaphor of Goldman Sachs as a “great vampire squid wrapped around the face of humanity, relentlessly jamming its blood funnel into anything that smells like money.”

However, its reputation suffered a severe blow in 2015 when it was forced to retract a story about an alleged rape on the campus of the University of Virginia. A police investigation failed to substantiate any of the accusations made about its key source, the presumed victim ‘Jackie’, and a Columbia School of Journalism report into how the article got published said Rolling Stone had failed to exercise “basic, even routine journalistic practice.”