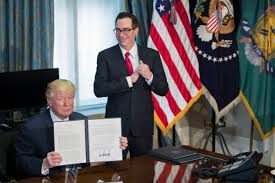 Trump’s Lower Tax Rates May Be a Fantasy

The Trump Administration’s paramount goal is sweeping tax reform that substantially lowers levies for the middle class and for corporations. The idea is to reduce and simplify rates, fueling economic growth, so that the overall pie expands rapidly. That extra growth should enable the Treasury to collect far more money than than our combination of high rates and sundry, complex loopholes can generate.

As Congress waits for the blueprint being devised by Treasury Secretary Steven Mnuchin, it’s important to assess whether, given today’s forbidding budget math, a future of lower rates is really fantasy. Indeed, if we assume that lower rates won’t hugely recharge GDP––the CBO’s traditional position––the numbers not only don’t work, they don’t even come close.

That’s the conclusion of a recent study the the liberal-leaning Tax Policy Center. The TPC ran an intriguing experiment, establishing a pure-play version of the Trump plan of curbing deductions in exchange for reduced rates. Its staff posed the following question: If the U.S. created a tax code that eliminated virtually all personal and corporate tax breaks, and also required that the plan be revenue neutral––meaning that receipts in 20 years had to match the numbers forecast today––how low could rates go?

That scenario would eliminate the AMT, and popular deductions for mortgage interest, charitable contributions and state and local taxes. On the business side, companies could not longer deduct their contributions for employees’ health care, and subsidies for R&D, green energy, and accelerated depreciation would also vanish. The conclusion: If almost all deductions were eliminated, the U.S. could lower rates to three brackets of 6.1%, 11%, and 28%. The corporate rate would go to 26%, also without reducing future tax revenue.

True, these rates are lower than the Republican House proposal for three brackets of 12%, 25%, and 33%. But the corporate is almost twice Trump’s target of 15%, and well above the low-20% range that’s been mentioned as most likely by the current House leadership.

This radically simplified regime would actually improve the outlook for debt and deficits—a bit. Eliminating loopholes would raise an additional $ 1.2 trillion over two decades; $ 300 billion of those savings would flow from reduced interest on the ballooning federal debt. Unfortunately, the improvement isn’t nearly big enough to forestall a fiscal crisis. Today, the CBO projects that the deficit will expand to a terrifying $ 1.45 trillion by 2027. The TPC scenario would pare just $ 103 billion, or 7% from that shortfall.

The TPC numbers suggest that killing all tax breaks isn’t sufficient to both pay for steep rate reductions and put the budget on a sustainable path. Hence, Mnuchin will face the following choice: Make all proposed reductions, and especially the number for corporate taxes, extremely modest, an approach that will severely disappoint business leaders looking for a radical, pro-growth revamping. Or, produce forecasts showing that far lower, flatter rates will drive a gigantic resurgence in growth.

On the other side of the aisle, the Democrats will push for a big revenue-raiser in exchange for lower rates, possibly including a new consumption tax or VAT.

Indeed, lower, flatter rates are a good idea. But paying for them with a VAT is not. Nor is it healthy to assume that huge tax cuts will pay for themselves. If America wants tax reform, the only responsible approach is to first reform what should come first, the unbridled growth in entitlements that makes slashing taxes that support that spending, on hopes the economy will boom, a dangerous shot in the dark.

This writer used to call the late, great economist Milton Friedman at the Hoover Institution, and if Friedman wasn’t available, he’d return my calls collect. He used to tell me, “Spending is taxation.” The sage was correct. If America’s spending continues on autopilot, and neither party has proposed anything to change that trajectory, taxes need to go up, not down. The best stimulus isn’t lowering rates and letting spending run wild. It’s ensuring that in the future, the private sector generates a bigger and bigger part of national income and the government absorbs less. Once we’re on that path, lower, simpler rates indeed make sense. We’re just taking the steps to in the wrong order. And that’s channeling Uncle Miltie.