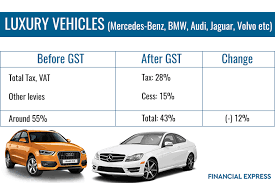 At the same time filing categories under certain structures within GST were pushed back until October or November, Jaitley said.

Most of these returns had initially been due between July and September.