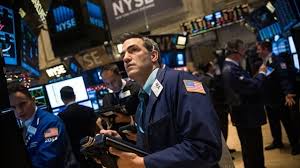 Summer is unofficially over now that investors have returned from the long Labor Day weekend. But is the year-long market rally about to end as well?

Stocks fell on Tuesday, with the Dow dropping nearly 275 points, or more than 1 percent, in midday trading.

A nearly 5% drop in defense giant United Technologies (UTX) was the main culprit, as investors expressed concerns about UTX’s $ 23 billion deal to buy Rockwell Collins (COL).But Wall Street giants Goldman Sachs (GS) and JPMorgan Chase (JPM) each fell about 3% as well. Big banks would be hit hard by any slowdown in the global economy.

That’s an ominous sign as the month of September kicks off. September is historically the worst month of the year for the stock market. And this particular September could wind up being a particularly tough one for investors.

President Trump and Congress have a lot on their plate: The North Korea nuclear threat. Trump’s tough talk with China on trade. A looming debt ceiling drama. A possible government shutdown if no federal budget is passed. Potential disruption by Hurricane Irma on top of damage done by Hurricane Harvey.

Increased tension with North Korea could be the catalyst for the market to take a hit. So could any inaction by Washington that leads to a default on U.S. debt payments and/or a government shutdown.

Will these and other concerns finally cause the market to dip in a meaningful way? After all, the Dow and S&P 500 are still up more than 10% this year while the Nasdaq — home to many high-profile tech stocks — has surged 20%.

Many investors believe that stocks are long overdue for a correction — a 10% pullback from recent highs.

“It’s probably a safe bet that volatility will pick up in September,” wrote William Lynch, director of investments with Hinsdale Associates, in a report Tuesday.

And after less than one day of trading in September, that volatility has already arrived.