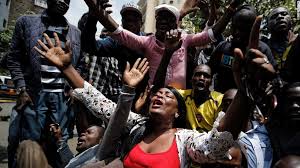 The decision, which followed a legal challenge over alleged voting irregularities, surprised investors. A sharp sell off caused trading to be briefly halted at the country’s main stock market in Nairobi, and the Kenyan shilling fell against the dollar.
Observers are worried that the ruling could result in a repeat of 2007, when the country plunged into widespread violence following elections.

John Ashbourne of Capital Economics estimated before the vote that a similar crisis would cut roughly three percentage points off quarterly economic growth.

Here are five things to know about Kenya’s economy:

It’s the biggest in East Africa

Agriculture is a major source of employment and the country’s largest sector, accounting for 25% of GDP and roughly 50% of export revenue. Tea, coffee, and mangoes rank among its top exports.

Kenya also relies on tourism for almost 10% of GDP, according to the World Travel and Tourism Council. The industry employs over 1 million people and is expected to host 1.2 million international tourists this year.

But it is vulnerable to shocks: Visitor numbers dropped by a third after election violence in 2007 and 2008. Terror attacks in 2013 and 2015 also hurt the industry.

The International Monetary Fund expects Kenya’s economy to grow by more than 6% this year and by 6.5% in 2018.

The strong performance is a bright spot in the region, where many large economies have been slammed by low oil prices and geopolitical pressure.

Regional growth slumped to its lowest level in 22 years in 2016.

But Ashbourne said that Kenya “seems to have sidestepped this regional slowdown.”

“The country is a net oil importer, and is in the midst of an investment-driven boom,” he said.

But the statistics are questionable:

Official growth figures bode well for Kenya, but economists are becoming increasingly skeptical of their accuracy.

Investments can be risky:

The country’s reliance on agriculture makes it vulnerable to bad weather, and the World Bank estimates that GDP drops by 0.6 percentage points in drought years.

Kenya also suffers with relatively high underemployment and youth unemployment, according to the World Bank. Roughly 40% of Kenyans live below the poverty line, and inflation hit a five-year high of 10.3% in March.

It has a lifeline from IMF:

The Kenyan government has secured a financial cushion from the world’s lender of last resort, the IMF.

The fund has allocated Kenya a $ 1.5 billion standby loan for use in an emergency.