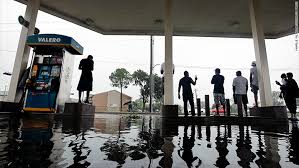 Gas prices: The Harvey news is getting worse

Tropical Storm Harvey is knocking even more Gulf Coast refineries offline, raising the risk of higher gasoline prices in the coming days.Prices at the pump haven’t budged much — yet. National average gasoline prices have climbed barely 3% over the past week, to $ 2.40 a gallon for regular, according to AAA.
But gasoline futures, which reflect wholesale prices and eventually trickle down to consumers, have started to spike again. Gas futures soared as much as 7% on Wednesday after extreme flooding forced the shutdown of two Port Arthur refineries, including the largest one in the U.S.

All told, gasoline futures have surged by 15% since Friday afternoon, before Harvey disrupted a huge chunk of the nation’s ability to turn oil into gasoline and other products like jet fuel.

Gas stations will eventually have to respond by jacking up prices on consumers, at least temporarily.

“Retailers can either go out of business or pass their costs along,” said Tom Kloza, director of global energy analysis at the Oil Price Information Service.

Kloza predicted that refinery shutdowns will lift per-gallon gas prices by 15 to 25 cents nationally, up from his earlier estimate of up to 20 cents. Prices are likely to rise even more in the Gulf Coast. Chicago-area prices are also set to jump because some Gulf Coast refiners send much of their gasoline to the Midwest.

But the era of cheap gas likely isn’t over — prices are expected to quickly go back down once Gulf Coast refineries go back online, Kloza said.

The eventual impact to gas prices is likely to be limited by the U.S. shale oil boom. Strong levels of oil production have thankfully left the country with ample stockpiles of gas and oil that can cushion the impact of Harvey.

Still, Harvey has dealt a serious blow to refineries, ports and production in the U.S. Gulf Coast, which is the nation’s key energy hub. The refinery interruptions have worsened as Harvey moved east on Wednesday, slamming into the Louisiana coast near the Texas border.

Fourteen Gulf Coast refineries have been shut down or are in the process of shutting, while several others are operating at reduced rates, according to S&P Global Platts. These total and partial shutdowns have wiped out at least 3.9 million barrels of refining capacity, Platts estimates.

In other words, Harvey has disrupted about one-fifth of the country’s total refining capability.

The No. 2 U.S. refinery, ExxonMobil’s (XOM) Baytown, Texas facility, is also offline and has suffered some roof damage. On Wednesday, Exxon announced the shutdown of its Beaumont, Texas refinery as well due to “operational issues” caused by Harvey.

Port closures in the region continue to spread as well, limiting the ability of refineries that remain open to access crude oil shipments. In addition to the key ports in Houston and Corpus Christi, ports in Lake Charles, Beaumont and Port Arthur are also down.

All of this means there is a lot less supply of gasoline, leading to higher gas prices. Goldman Sachs estimates that the storm has left the market short of about 1.1 million barrels per day of gasoline.

The good news is that refineries haven’t reported major damage thus far and some in Corpus Christi are reportedly trying to start back up.

However, the extreme flooding could prevent some refinery workers from being able to return to work.

“One of the trickier challenges is the human impact,” said Regina Mayor, global head of energy at KPMG who is based in Houston. “It’s devastating to have your home flooded and deal with that emotional trauma. So many people across the city have experienced it.”