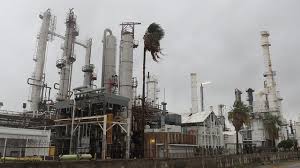 Harvey: Why oil prices are falling, not spiking

Hurricane Harvey dealt a powerful blow to oil production in Texas and the Gulf of Mexico.

Normally, that would spark fears of a supply crunch and lift the price of oil. Yet the opposite is happening.
Crude prices tumbled by nearly 3% on Monday, the biggest drop in nearly two months, and dipped again on Tuesday.

So why hasn’t Harvey led to higher oil prices like it has with gasoline prices?

The key is that the historic storm has hammered demand by crude oil’s biggest customers: refineries and American drivers.

Harvey forced the shutdown of 10 oil refineries along the Gulf Coast, a U.S. energy hub. At least one, ExxonMobil’s (XOM) huge Baytown facility, has suffered damage. And the refineries that remained open aren’t operating at full speed. Ports in Houston and Corpus Christi are closed, so there’s less oil to refine.

Almost 3 million barrels of oil a day can’t be refined into gasoline and other products — about 16% of U.S. refining capacity, according to Goldman Sachs.

That’s far more than the amount of oil production that has been interrupted. FGE Energy estimates that Harvey interrupted the production of about 380,000 barrels per day in the Gulf and 400,000 barrels inland. No major damage has been reported to oil rigs, and production is beginning to come back.

And the U.S. shale oil boom has lifted production so high that the country is brimming with enough crude to soften the blow from Harvey.

Meanwhile, the storm has hurt demand for oil products. The storm has crippled Houston, America’s fourth-largest city. That means less appetite for gasoline for cars, diesel for trucks and jet fuel at airports. FGE estimates that flooding may slash gasoline demand by about 150,000 barrels per day.

The eventual hit to U.S. oil demand will ultimately be larger than the impact on supply, Goldman Sachs predicted. That forces the price down, not up.