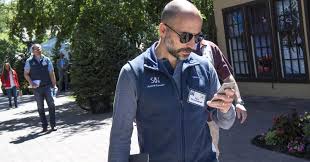 Uber’s search for a new leader has been highly publicized, with candidates including HPE’s Meg Whitman and HP’s Jeff Immelt.

And while leaks have become an increasingly common part of Uber’s internal war in recent months, it may come as a surprise that Uber’s board has decided to offer Dara Khosrowshahi the job of the ride-sharing app’s CEO.

While a new player in the story of Uber’s CEO search, Khosrowshahi, 48, is a well-known executive. Born in Tehran, he became CEO of the travel site Expedia about 12 years ago — though he got his start at the investment banking firm Allen & Co in the midst of a media merger mania.

Though Khosrowshahi has not yet officially accepted the gig, Expedia’s Chairman Barry Diller wrote in a note to employees: “N othing has been yet finalized, but having extensively discussed this with Dara, I believe it is his intention to accept. ”

Here’s what you should know about Khosrowshahi:
Expedia’s stock prices surged under Khosrowshahi

Conventional wisdom says that it’s better on the overall stock market than a particular stock. But an investor who had decided to invest in Expedia rather than the wider market 12 years ago would have made a lucrative call. While the S&P 500 has risen about 98% since Khosrowshahi became CEO, Expedia’s stock has risen about 523%.

Between 2005 and 2016, Expedia’s revenue grew from $ 2.1 billion to $ 8.8 billion, while its market capitalization rose from $ 8.3 billion to $ 21.7 billion. Khosrowshahi has also been praised for his dealmaking acumen. Under his lead, Expedia added Travelocity, Orbitz, HomeAway and Hotels.com to its family in a bid to compete with companies such as Airbnb and Bookings.com.
Khosrowshahi is already rich

According to his most recent forms with the Securities and Exchange Commission, Dara Khosrowshahi’s stake in Expedia is worth about $ 67.9 million stake, while his stake in The New York Times, where he is a director, is worth a third of a million. That came after he sold off some Expedia shares, netting about $ 11.7 million in the sale.

While most executives derive a large chunk of their wealth from their stock holdings, it’s hard to say for certain exactly how much Khosrowshahi is worth. The value of any real estate or cash holdings Khosrowshahi may have could also bolster his net worth.

The CEO earned roughly $ 33.5 million in cash during his time as Expedia’s chief, according to SEC filings.
He’s committed to pay equality and female leadership

Khosrowshahi has discussed the importance of pay equality and female leadership.

“While we compare well with many of our technology peers, we have a long way to go in bringing more female representation into leadership roles,” he said in a statement in June 2016. “We need to attract, hire, engage and promote talent of all kinds all around the world, and we believe that by enriching the diversity of our work force across all dimensions, including gender, we achieve the most enriched outcomes.”

In contrast, the atmosphere at Uber appears quite different on paper. According to statistics Uber released after some employees were accused of sexual harassment, women held about 36% of positions at Uber globally, and about 22% of leadership roles.
He’s an outspoken critic of President Trump

In early February, the Iranian-American executive reportedly ended an earnings call with the words: “Hopefully we will all be alive to see the end of next year.”

That sentiment doesn’t appear to have abated in recent weeks. After Trump reiterated that he believed the violence in Charlottesville was the responsibility of both sides, Khosrowshahi tweeted, “I keep waiting for the moment when our Prez will rise to the expectations of his office and he fails, repeatedly.”

I keep waiting for the moment when our Prez will rise to the expectations of his office and he fails, repeatedly.

While Uber founder Travis Kalanick was seen as impulsive, Khosrowshahi has been dubbed “even-keeled and low-key,” according to the Washington Post.